Or maybe you say “Yes, of course.”

If you say yes, you’re making the same mistake that 42% of high-school students make. I just invented that statistic on the spot, but it probably is a low estimate. I’m not just talking about sophomores in my college-prep Algebra II class, though that might be what you suspect. I’m also talking about freshmen in my honors geometry class. You might think that students in an honors math class, students who had successfully completed an algebra course just the previous year, would know better — but you would be wrong.

Most alarmingly, I’m even talking about juniors in my honors precalculus class! It’s not the most common error in honors precalculus — that award goes to square-rooting each side of an equation without doing “±” — but it’s definitely the silver medal winner. Everyone knows how to distribute multiplication over addition, so the obvious extension is to distribute exponentiation over addition.

I was reminded of all this when reading about the Dead Puppy Theorem in the Bowman in Arabia blog this morning. Bowman Dickson’s approach to eliminating this error is to make several classroom posters, of which this is the first: 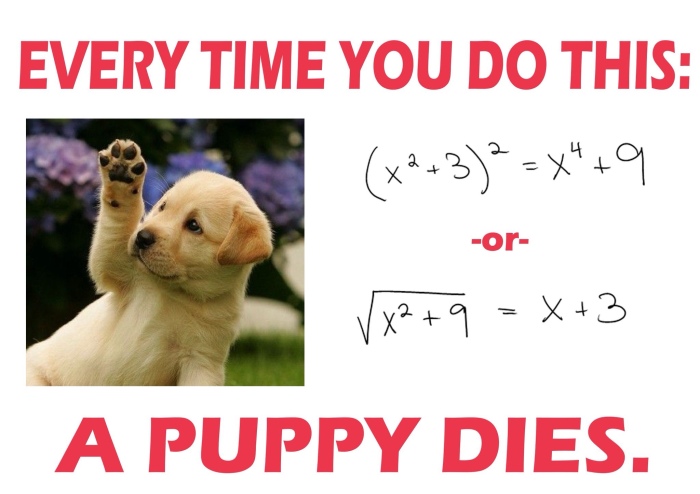 This may seem a bit extreme, but Dickson claims that the students enjoy it and will always remember it. Maybe I should give it a try.

I notice that many teachers, including one of the commenters, try to fix this error by having students “check their work” by substituting values for x and y (or a and b, or whatever the variables are — often it’s a variable and a number). As long as neither value is zero, the purported equivalence will fail. Sometimes I too resort to this explanation. Or I draw boxes to show that they’ve left out two of the four pieces of the product. But this fix is nearly worthless. They’ve seen the explanation before! They may even believe it. But it has never become automatized, so the mistake will just recur. If your intuition tells you that (a + b)2 = a2 + b2, you have no reason to stop and check your work at every moment. That way lies madness. As Alfred North Whitehead said, “Civilization advances by extending the number of important operations which we can perform without thinking about them.” Or, as I pointed out in an essay I wrote last year, “If you have to think what 2x + 3x is whenever you do an algebra problem, you’ll never be able to pay attention to the Big Ideas.”

But I think I’ll still try the poster.

‹ MIT does not equal Mitt
Persistence ›