Home › Books › Oh no, not another Jeopardy book!

Oh no, not another Jeopardy book! 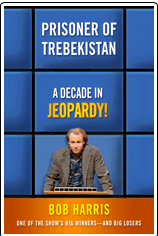 Just look at the title! That’s all you need to do in order to know that Prisoner of Trebekistan: A Decade in Jeopardy! is a quirky book.

I think this is the fourth book that I’ve read about Jeopardy, but let me count:

OK, so that turns out to be only three, not four. But it sure feels like four. I don’t think I really need to read a fourth, even though there are several candidates for that honor.

So how does this book compare to the previous two? (I say “previous” since they were the two that I read first, but this one was actually published seven years ago, so technically speaking the other two are subsequent, not previous.) You can see the links above for my reviews of the Jennings and DuBois efforts; I liked the first and disliked the second. As for the Harris book (Why do all the authors’ names have to end in “s”??? It makes possessives so awkward!), this one has its own peculiar strengths and weaknesses. As I said, it’s quirky. It often goes into long digressions about the author’s personal life, and most readers probably won’t want to know all that. “Too much information!” they will scream. But some readers will find that these digressions add a welcome touch of human interest to what is otherwise a really geeky book. Yes, admit it, Jeopardy is about as geeky as you can get.

Along with the personal info, Harris gives lots and lots of detailed information about the matches, the clues, the contestants, strategies, and tactics. I enjoyed all that, and learned a lot. If you think that Jeopardy is nothing but a mindless trivia game, think again. It’s a great deal more than that.

Finally, I must talk about style. DuBois writes in an irritating style that badly needs an editor, Jennings writes in an unassuming transparent style that never gets in the way, and Harris writes in an engaging style that keeps drawing the reader’s attention. If you like that, you like it. I do. That might be because Harris’s sense of humor and stylistic quirks often resemble my own. Here’s a typical page: