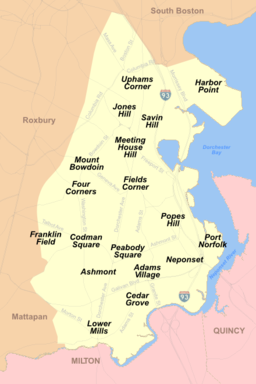 Twenty-five years ago you could count the number of good restaurants in Dorchester  on the fingers of one hand (even if you had broken two fingers). Today it would take both hands and a foot…more likely two feet. The first of these transforming restaurants was 224 Boston Street, which initiated the slow but steady progress that turned Dorchester into a destination for good food. It must have been more than 25 years ago that 224 first opened for business, and they’ve only gotten better (and more expensive, unfortunately). Last night Barbara and I happened to be in the neighborhood (the northern edge of Dorchester, next to the Polish Triangle), and we hadn’t been to 224 in a while, so we decided to have dinner there. We were not disappointed. I started with an excellent tomato bisque, followed by yummy New Zealand rack of lamb (cooked on the rare side of medium-rare, as I like it), accompanied by a tart-but-sweet sauce, haricot verts cooked just right, and a potato-ricotta croquette that was better than it had any right to be. I gave into temptation and then had home-made Boston cream pie for dessert; it was delicious, but it added far too many carbs to the entire dinner!

A review on Gayot includes some pointed and accurate comments on the restaurant and its neighborhood:

Beyond Newbury Street and what the tourists see of the North End lies the real Boston, where folks work and have families and live in triple-deckers and, increasingly, skip the pubs in favor of neighborhood eateries like Dorchester’s 224 Boston Street. It’s a microcosm of area diversity: old, young, gay and straight, émigrés and dyed-in-the-wool locals. The décor in many ways reflects the crowd—no two lamps or sconces look alike, the tableware is vintage yard-sale mix-and-match, and local artists provide the paintings. The menu, however, is all of a piece—a smart, yet accessible, piece. Everyone’s favorites are here—burgers, meatloaf, swordfish, roast chicken—and they’re all generally treated with care…

Oh…I observed in my opening paragraph above that now there are many good restaurants in Dorchester. Here are a few, in no particular order:

Sorry for the lack of links, but Google is your friend.

‹ The Jewels of Paradise
The food never arrived! ›