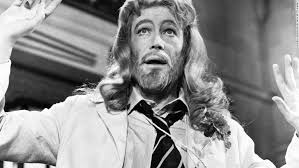 Wow! What a great film!

This over-the-too British film is classified as a “black comedy,” and that’s definitely what it is. As you might guess from the title, it’s also a social satire focusing on the class system in Britain. What you can’t guess from the title is that the acting is mesmerizing: Peter O’Toole is magnificent, but most of the rest of the cast is impressive as well. No .spoilers here, but the British upper class and the Church of England are skewered throughout the movie. The viewer needs a bit of background, but nothing esoteric — just, say, some knowledge of the British class system and some awareness of references to Eton, Marx, Land of Hope and Glory, Jack the Ripper, and the House of Lords/ (How did Marx get in there? You’ll just have to see the movie to find out.)

The Ruling Class, of course, was meant to be viewed from the lens of 1972 Britain. But it takes on a new interpretation today in 2016 America. The current crop of Republican candidates for president cry out for this satire on “the ruling class,” except that they keep confusing themselves with populists. Somehow that works with Americans, though it would never fool the 99% in Britain.

‹ 17 equations that changed the world
Who needs advanced math? ›