Ben X (a film about Asperger’s) 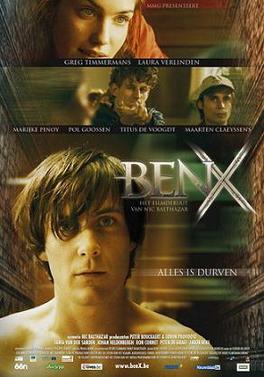 I’m talking about Ben X, a subtitled 2007 Dutch-language movie from Belgium — a work of fiction, based on a real story.

I don’t have any problem with serious films, but I just had to stop watching Ben X half-way through. Along with being too grim, it bordered on triggering, and it would certainly be triggering for anyone who has suffered severe bullying. Fortunately, that wasn’t me. As I wrote ten months ago, the bullying that I experienced in high school was manageable, even if one of the chief bullies eventually became president of the United States. (No, not Donald Trump, although he too is a bully. Read my post to find out who.)

What I experienced in high school was definitely manageable, but what Ben’s so-called “friends” put him through was definitely not. The two worst bullies, who somehow act and look just like typical American high-school bullies — why should Belgians be any different, I suppose? — mockingly call Ben their “best friend,” and he doesn’t quite understand that they’re mocking him. He is clearly on the autism spectrum, although it isn’t until he’s in high school that he’s finally diagnosed as having Asperger’s; until then everyone just thinks he’s odd. His only escape is in immersive video games, where he can be someone. In the worst incident — at least the worst in the first half (before I gave up) — his classmates pull down his pants after the teacher leaves the room and make a video of the whole event, which of course gets posted on social media almost immediately. Ben does have some support among his quieter classmates, but no one does anything, and even the teachers and the headmaster basically shrug and say there’s nothing they can do.

The subtitles, by the way, are excellent, even though it’s not immediately obvious why the title is Ben X. What’s the X? Is it some obscure reference to Malcolm X? Not likely for a kid in Belgium. It turns out that some knowledge of Dutch would help, but my Dutch is pretty weak — whether it’s the standard dialect in the Netherlands or the various Flemish dialects in Belgium. Fortunately Dutch is pretty much the closest language to English (although it’s the neighboring minor language of Frisian that takes that title); many sentences are therefore understandable even without subtitles, especially short sentences containing nothing but short words. Anyway, so why is the title Ben X ? Here’s where yet another related language comes to the rescue: German. Although I know essentially no Dutch, let alone its Flemish dialects, I do know a fair amount of German, so I realized from listening to a couple of bits of dialog that all I had to do was say “I am nothing” in German and try for a Dutch accent. You see, Ben understandably has a very low self-image, at least in the real world if not the virtual one, so he says to himself “Ich bin nichts” or rather the Dutch equivalent thereof. Dropping the subject, we get “bin nichts,” which sounds just like “Ben X” if you say it with a Dutch accent. Mystery solved!