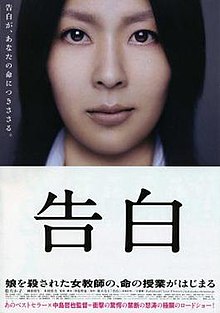 This psychological thriller by Kanye Minato is not a typical book, at least not in my universe. Some say that it’s a lot like Gone Girl — but I wouldn’t know, since I’m apparently the only person on Earth who hasn’t read Gone Girl.

Also, not knowing Japanese, I feel a little odd reviewing Confessions, since it’s an English translation of a Japanese original. Not that I have any reason to doubt the quality of the translation, which reads fluidly enough in English and also has the ring of authenticity as far as the original is concerned — but traduttore, traditore after all.

Confessions was clearly inspired by Rashômon, which Minato actually refers to in passing at one point in the novel. As in Rashomon, the story of a murder is told by four different viewpoint characters — all narrating the same story that’s not the same story, since the accounts are contradictory. Or perhaps you’d prefer the blind men and the elephant if you want something less graphic; it’s the same idea.

On another level this is an unemotional novel about middle-school sociopaths, a bit like Lord of the Flies in its portrayal of apparently normal but deeply evil tweens. So there we have another influence. And then there’s Heathers, which also is apparently an influence here; in fact, Alex Marwood remarked that “if Albert Camus had written Heathers, it would have looked a lot like this.” Ponder that for awhile.

The plot has enough twists to keep any reader interested. And you don’t have to figure out which of the unreliable narrators you should identify with, since you won’t identify with any of them. Teachers, kids, parents — nobody comes off very favorably in Confessions. I’m not going to say anything about the plot (I’m not giving away any spoilers), but let’s just say that it’s fascinating, thought-provoking, and bleak. Is that your cup of tea?