York. Book One: The Shadow Cipher 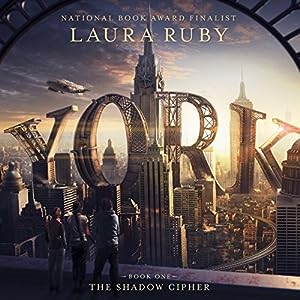 Yes, it’s a YA novel; I don’t teach middle school, so why did I read it? The Shadow Cipher (Book One of Laura Ruby’s promised trilogy, York) is clearly aimed at intelligent seventh-graders. Yes, it got great reviews — but still, why would it interest me?

Well, as the title suggests, it’s (in part) about cryptography. And one of the characters is a 45-pound (genetically engineered) cat. With this combination, how could I resist?

Anyway, it’s hard to pin down the genre of the York trilogy. Part realistic fantasy, part science fiction, part alternative history, part adventure story, it mostly reads like a straightforward YA narrative taking place in the present, except that there are several characteristics of the otherwise scrupulously rendered New York City that don’t quite match the reality of our world. Genetically engineered pets are common, the subway is the “underway,” and a lot of technology is subtly different. As Cecilia Larsen wrote:

Tess and Theo Biedermann and their neighbor Jaime Cruz live in a city that is like New York City, but not. In this version of York the famous Morningstarr twins started inventing and building a fantastical array of dwellings, transportation, and life-like machines in the late 18th century, and the present-day result is a steampunk-like mashup of technological wonder. When they left, the Morningstarrs also left a trail of clues to rumored treasure – the mysterious Old York Cipher. For Tess, Theo, and Jaime, solving the Cipher may be the only way to keep their home safe from an avaricious real estate developer – but the clock is ticking. Will they solve the Cipher and save their building in time?

If this sounds a bit like Harry Potter, I don’t think that’s a coincidence. The gestalt is quite similar. I found the book captivating for some of the same reasons that I and so many others were captivated by the Harry Potter series. But there’s no reason for me to rephrase what the aforementioned Cecilia Larsen has already articulated:

Now on to the things that I liked particularly (a different kettle of fish from admiring a well-constructed plot & characters, or great writing!) (which this book has in spades): parents who are alive (how many times do you see that in a kidlit book?!)! A diverse main character and secondary characters! A main character with anxiety and a service animal. A cool map of alternate New York and great descriptions of that feeling of insignificance you get in big cities. Social justice (pro-immigrant, pro-education, pro-affordable housing) baked in. Added to that, this is just such a smart book, with believably smart characters. Author Ruby doesn’t hold back – her characters use big words and think big ideas because they are intelligent, and Ruby obviously believes her readers are as well. I love that trust in the reader, and I think readers will sense it immediately.

By the way, for readers like me who are picky about accuracy of details, I have absolutely nothing to complain it. Although the author isn’t from New York, she has accurately captured both facts and impressions of the city. And she isn’t a cryptographer, but virtually every detail about ciphers is correct. Unfortunately the cipher aspect is not fully developed, at least in Book One, but that’s OK. Read the book!