I can’t help keeping track. Four restaurant meals ago, at the Menotomy Grill, our young server said “Awesome!” four times during our meal. I foolishly thought that would be some kind of record. Lower Mills Tavern was better: just two “awesome”s (and two “perfect”s). And the Beijing restaurant was better yet in the awesome department: none at all. But then we come to yesterday’s wonderful dinner at Ashmont Grill (details below): eleven “awesome”s from a single server! Apparently millennials really do talk like that. 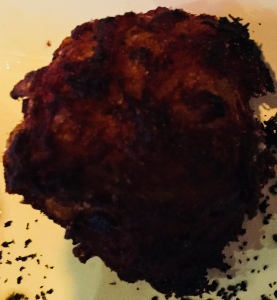 So what was up with that meal at Ashmont Grill? Was it really awesome? Well, yes. Barbara started with ordinary but excellent chicken wings, and I ordered the amazing special: smoked cod fritters with lemon aioli and leek ash. There were four fritters, but I forgot to take a picture until only one was left. The leek ash looks a bit odd in the photo, but it was all scrumptious.

For the entree, Barbara settled for their always-reliable mac and cheese — with a salad of farm greens, cucumbers, carrots, and cherry tomatoes — but I chose the duck. (Always pick duck or lamb where you can get them, since most restaurants serve neither.) Served medium rare, of course, the duck this week came with smoked peach bourbon BBQ sauce, corn-zucchini griddle cakes, and watercress. The watercress made a fantastic foil to the richness of the duck and the sweetness of the sauce. The griddle cakes were just as scrumptious as those smoked cod fritters: what a sequence! Here’s what the griddle cakes looked like:

I had to take half of my meal home in order to save room for dessert, since there was another special: peach-blueberry cobbler à la mode. Somehow I managed to eat every bite of this great dessert, accompanied by a double espresso, which never keeps me up at night. So we’ll conclude with a shot of the cobbler.

‹ A college that I did not get into
Singular “they” ›