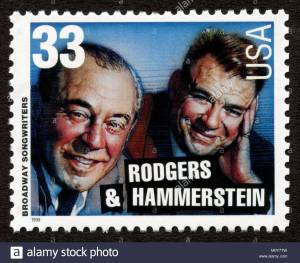 You need the subtitle. The full name of the book is Something Wonderful: Rodgers and Hammerstein’s Broadway Revolution, which gives you a pretty good picture of the subject of the book. As I grew up in the ’60s, I was always aware of the Rodgers and Hammerstein collaboration as an important component of musical theater, even though they were never my favorite. None of my favorite Broadway musicals — My Fair Lady, West Side Story, Boys from Syracuse, Fiddler on the Roof, Camelot, Les Miz, Fiorello — came from their pens (though Richard Rodgers did write the music for Boys from Syracuse, but it was with Lorenz Hart as the lyricist, not Oscar Hammerstein). It’s not that I was too snobby for Rodgers and Hammerstein, it’s just that… well, maybe I was too snobby. Oklahoma, South Pacific, The King and I, and especially The Sound of Music, all just seemed impossibly middlebrow.

Now that I am older and hopefully more mature, I think… I think… well, I still think that the first set of seven musicals in the paragraph above are all better than the R&H set of four later in the paragraph. But I didn’t know enough about the R&H musicals, and I do have more respect for them than I used to, so I wanted to read Todd Purdum’s informative account of their influence on Broadway after hearing an interview with him on NPR. It’s not a biography — though of course it includes large chunks of biographical material along the way, and if you already know a lot about R&H you might not learn a lot from it — but I knew so little beforehand that I ended up learning something from every page. So read it if you don’t know too much yet and want to learn more.