Do Trump supporters have empathy?

What does brain science show about whether Trump supporters have empathy? Three days ago I published a post, “Red Brain, Blue Brain,” about a recent Hidden Brain podcast. I discussed some conservative/liberal generalities, but nothing specifically physiological or anatomical. Now it’s time for some specifics.

In particular, we wonder what the brain shows about responses to pain felt by others. Not your own pain — other people’s pain:

There have been three or four studies that attempt to see if the brain activation patterns of liberals and conservatives is different. And the one that we did goes back to kind of our favorite thing, which is to show them these different kinds of pictures. Actually, we had the most luck with pictures of mutilations. And you’re right. When we did that, it was very easy to categorize people, you know, without knowing anything about them. All we would look at was the brain scan results. And we could be incredibly accurate knowing whether they were liberal or conservative just on the basis of that. Liberals’ brains, when they looked at mutilation images, were much more active in a part of the brain called the S2, somatosensory 2. And this is part of the brain that will be activated if you suffer pain. So if I kick you in the shin, your somatosensory 2 would be active. But it’s also active if you see pain in others. And so if you would see a movie of somebody stepping on a rusty nail — goes right through their foot — your somatosensory 2 would be active. And what we saw in these brain scans was that liberals were more likely to have activation in the somatosensory 2 than conservatives.

I do wonder how big the difference is — what does “more likely” mean? — and whether the result would change if we narrowed the category of conservatives to Trump supporters. Certainly not all conservatives support Trump, although these days 90% of Republicans do so, according to recent polls. My hypothesis (little more than a gut feeling) is that the brains of conservatives who don’t support Trump wouldn’t show the lack of empathy in somatosensory 2 described above. 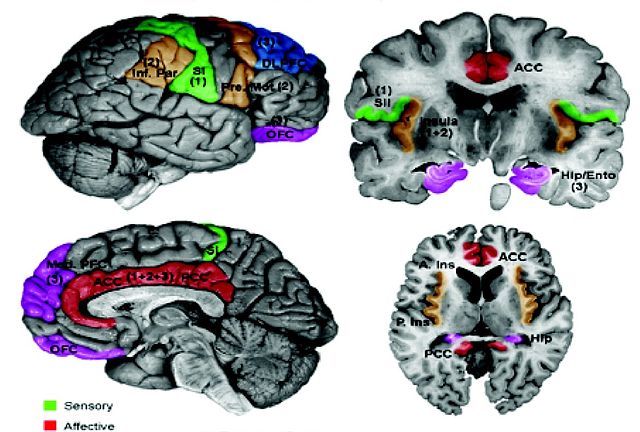