Is it “Music City” or “Athens of the South”?

Yes, this is the Parthenon. But no, we’re not in Greece.

This is the Parthenon in Nashville, not the one in Athens. Barbara and I just got back from a three-day visit to see our niece, Aviva, who is currently living in Nashville, so we got to play tourist and see a lot of the city. When I was a kid, we knew that Nashville was the Athens of the South — not to be confused with Boston, which of course is the Athens of America. (Note that we Bostonians have claimed all of America, not just New England.) Now Nashvillians mostly want to be known as Music City, except when you visit classical sites like this one, which is a life-size replica of the original Parthenon, done in painstaking detail. I want to point out two particular features, showing why I say the “the original Parthenon,” not “the Athenian Parthenon in its current state” after two millennia of erosion. The pediment, which you can see below in close-up, is colored in appropriate classical detail, not in the pure white that most Americans imagine classical marble to have been; and the huge re-created statue of Athena inside the temple is not only appropriately colored but also carved in its original size, which is far more than “life” size, as you can see here if you compare her to the family at the bottom of the picture:

While we’re on the subject of culture, we also enjoyed our visit to the Frist Art Museum (which is really Nashville’s art museum, even though the city’s Parks and Rec Department claims that the Parthenon is “Nashville’s art museum” — half true as it does indeed house an art museum in the basement). I highly recommend the Frist, especially for its current exhibit on Paris in 1900. I am somewhat less enthusiastic about their exhibit of works by Do Ho Suh, which you’ll like if that’s the sort of thing you like. (Check out the image in the link.)

Although our hotel was a bit distant from downtown (about three miles), and although the city’s idea of public transit is less than perfect, we managed to get around effectively with two means of transportation during times when Aviva was at work. One was the Old Town Trolley, which operates those fake trolleys (really buses, since there are neither trolley wires nor trolley tracks) that you might have seen elsewhere, such as Boston. The 15 stops provided a day’s worth of overview, and with unlimited hop-off-hop-on we could visit several sites for as long as we liked. Our other transportation opportunity was our hotel’s free shuttle, which took us anywhere we wanted to go within a two-mile radius of the hotel and then picked us up afterward whenever we wanted. One of those places was the Belmont Mansion, which we highly recommend if you’re interested in history in general or historic houses in particular:

A “summer cottage,” they called it. Oh well, the cottages in Newport are even bigger.

Union Station was also worth seeing, even though it is now a hotel rather than a train station. Here’s the lobby: 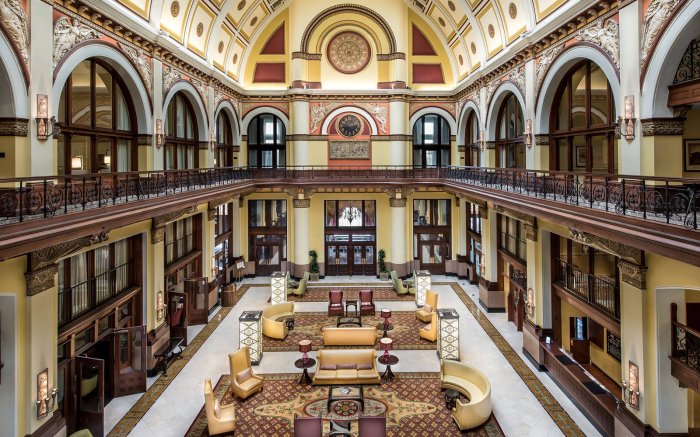 To complete the historical piece, we saw a terrific exhibit (at the beautiful main library) about the history of the civil rights movement in Nashville. (If you’re old enough, or generally well-informed on these matters, you will recall the 1960 desegregation of the lunch counters there. The lunch counter at the original Woolworth’s where John Lewis’s historic sit-ins took place has now re-opened, but we didn’t get a chance to eat there.) 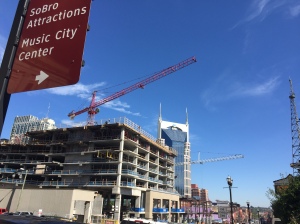 We also got to see three singer-songwriters perform at The Listening Room (this is Music City, after all), got a brief tour of a street filled with three city blocks worth of music studios, and walked around the somewhat Cantabrigian neighborhood called 12 South, where we had a lovely dinner at Josephine’s. And somehow we managed not to be too inconvenienced by the omnipresent construction, which is even worse than Boston’s — to the point that one of the trolley drivers called Nashville Crane City rather than Music City. See the image of downtown, and compare it to the tranquillity of the Parthenon that opened this long post: