Home › Linguistics › Is it Hanukkah, Chanukah, Hanukah, or … ?

Is it Hanukkah, Chanukah, Hanukah, or … ? 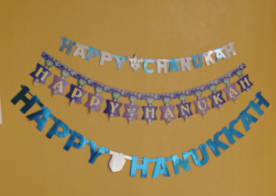 This post in All Things Linguistic is the best description I’ve seen yet of why there are so many English spellings of Hanukkah (but the author oddly leaves out “Chanukah” in her list at the end, even though it’s in the very first photo at the beginning!). You can understand it even if, for some reason, you don’t know what a voiceless pharyngeal fricative is. Here’s what the semi-anonymous author says:

Gather round, my children, and let me tell you how to spell this pesky word.

I’ll start by what everybody agrees on in the spelling: the vowels. Everybody agrees that they go -a-u-a- (I’m using the dashes to denote possibly missing consonants for now).

You may have noticed the 2 different spellings of The Word in Hebrew above:

That covers the vowels. Next, the bits where everybody who knows even a bit of transliteration would agree on:

This leaves us with -anuk(k)a- as a definite spelling so far.

This is where things get murky. Because you see … this is when the transliteration rules start falling apart by way of a long tradition of transliteration as well phonology rules across several languages in the duration of about 2000 years.

The beginning ח: is it h, kh, or ch? Frankly, it could be any of these.

What you should be careful of, probably, is mix-and-matching. Khanuka is just outright weird, because you’re mixing a bunch of translit styles – going from extreme translit mode (KH) to mild mode (one K, no H). Chanuka also looks strange, because the CH is also somewhat strict-ish translit.

This all means that these are all the correct spellings in English, from a Hebrew standpoint, from most-strict transliteration to the most permissive:

You’re welcome, and may you all confuzzle everybody you come across!  🎉

‹ Misplaced modifier
The first film ever in Babylonian! ›