Home › Books › How geeky can you get?

How geeky can you get? 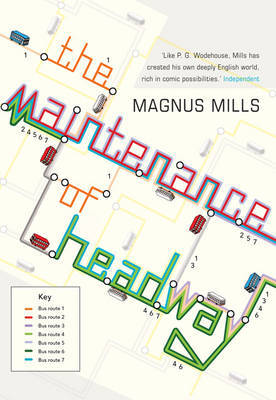 ‘There’s no excuse for being early,’ said Breslin.

He looked at his watch, studying it intently for several long moments before returning his gaze to me.

‘So now we’ve both agreed there’s no excuse for being early,’ he said. ‘Why are you early?’

While I was reading a different work, The Broken Teaglass, as discussed in my preceding post, I thought that dictionary writing must be the geekiest possible topic for a novel. But I was wrong. Now I know that bus schedules hold that honor! Yes, an entire novel about bus schedules. It’s The Maintenance of Headway, by Magnus Mills. It opens with the paragraphs quoted above. Although it’s very British — as you can tell from the use of single quotation marks, if you’re sufficiently geeky to notice that sort of thing — almost everything in it applies equally well to buses in American cities (except for the incessant need for tea breaks). The biggest issue is reflected by the title: an obsession with the failure to maintain headway.

If you don’t live in a big city like Boston, you may not know what that expression means. If you live in an even bigger city, especially New York, you’re all too familiar with it. Yesterday, for instance, I passed three #23 buses in a row, one right after the other. And then you wait half an hour for the next one. That’s called failure to maintain headway.

Although I admit that this somewhat peculiar novel is rather thin on characterization and even thinner on plot, it’s great fun to read. Your mileage may vary, as they say, but I enjoyed it a lot. It helps if you appreciate dry British humor. For instance, consider the three laws of the Theory of Early Running:

How often, I ask you, do you come across a novel that explicitly mentions mathematical induction? That alone is worth the price of admission.

I was also struck by the occasional explicitly British reference (in addition to those ubiquitous and continual tea breaks). For instance, the claim that “people in this country don’t like sitting next to other people. Especially strangers. When it comes to buses, the more space the better.” In my experience that’s true here too — maybe not in the entire U.S., but at least in New England. That’s probably why we call it New England.

And does this verse apply here as well?

The people expect the bus to be late,
yet they go to the bus stop early and wait.

And then you may have wondered what’s up with people who run to make the bus ”as thought their life depended on it,” in Mills’s words.

Runners were divided into two sub-categories: ‘logical’ and ‘illogical’. Logical runners ran in the same direction as the bus they were pursuing. Illogical runners were the ones who had given up waiting for the bus and begun walking toward the next stop. Then, when they suddenly heard the bus approaching, they came running back. It made no sense whatsoever to run away from their final destination, yet many people did this quite regularly.

I have to admit that I have occasionally been an illogical runner myself.

In conclusion, Mills explains why buses tend to clump together:

The most common grouping arises from the so-called Three Bears Syndrome: one bus running early, one running late, and one running exactly on time. In consequence, three run together.

‹ Lexicographers: Fact or Fiction?
What’s the difference between honors and regular math classes? ›