Home › Books › The Punishment She Deserves

The Punishment She Deserves 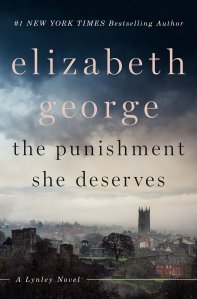 Elizabeth George writes literature, not genre fiction. That’s the sensibility of her novels, even though they are technically mysteries, which should make them genre fiction. The Punishment She Deserves is the 20th of her Lynley/Havers books, and I think I’ve read all of them, even though this is only the third that I’ve reviewed here.

This one is fascinating — and a bit of a relief from the grimness some of George’s recent efforts, unless you are shocked (shocked, I say) to learn that 18-year-olds may be participating in sex and binge drinking, even in England. For an American reader it might be a bit confusing that college and uni (university) are not the same thing, as many of the characters in The Punishment She Deserves are what we would call college freshmen but in this context they won’t be going to university until the following year: they are attending a “sixth-form college.” There are more issues in this one than in most of George’s books — issues of class and immigration and family and morality and alcoholism — so you can’t expect a straightforward mystery. As I mentioned in my earlier reviews of Careless in Red and This Body of Death, it helps to have read earlier Lynley/Havers novels, mostly so you will have some idea of the characters and their back stories. That’s true not only of those two New Scotland Yard detectives but also of their boss (their “guv”), Isabelle Ardery. Aside from the characters, you might also want to have some knowledge of the Anglican Church, although it will save you from a spoiler if you (like me) don’t know a crucial plot point in advance. It won’t be a spoiler to tell you that there’s a running subplot about helicopter parents who want to plan their kids’ lives for them. There’s also a subplot about tap dancing of all things, but pay no mind.

Anyway, do read this captivating novel even if you haven’t read the preceding ones in the series. It will hold your attention and will make you think.

‹ “Why Girls Beat Boys at School and Lose to Them at the Office”
I found the missing R! ›