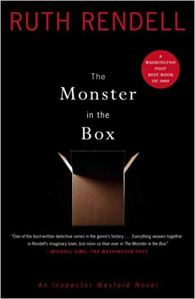 Lawrence Block’s latest novella, A Time to Scatter Stones, and one of Ruth Rendell’s last novels, The Monster in the Box, have something in common — a couple of things, in fact. It’s no coincidence that both books were written late in their authors’ lives. (I’m being a bit unfair to Block, since he’s only nine years older than I am, and still going strong as far as I know.) The first thing they have in common is an explicit emphasis on looking back, of reminiscence, of remembrance of times past (not “in search of lost time,” as the new and more accurate translation has it). The second thing they have in common is subtler, a sense of breaking the fourth wall, in which the characters come close to a self-conscious realization that they are characters in a novel.

Block is not only a writer but also a teacher of writing, and it shows when you read him. The text in every book he writes flows smoothly and naturally, conversations are realistic, and plots are interesting without being convoluted. It’s never great literature, but so what? His mysteries won’t make anyone’s “top 10” list, but that’s OK. They’re almost always absorbing, and even without being great literature they have a point to make. A Time to Scatter Stones is perhaps the final book in the Matthew Scudder series, in which Manhattan effortlessly comes alive in a realistic and compelling way. Alcoholics and ex-prostitutes populate Block’s pages, but in a straightforward, never sensationalistic way. This volume, however, is more controversial than the preceding ones, as can be seen from the readers’ reviews on Amazon. For instance, “Top 50 Reviewer” Jill Meyer admits that “Lawrence Block is a great writer! He can advance plot and character development better than almost any other author I’ve read, using dialog to do so.” But then she goes on to complain:

In between sex scenes, we find out a bit what has happened to TJ, Mick, and others who have been such important parts of Block’s earlier Scudder-works. But it’s not enough backwards looking to satisfy me. I wasn’t offended as much as I was just plain bored with the book. Thanks god it’s under 100 pages.

That’s a little — more than a little — unfair. The sex scenes are never explicit in the story, nor do they predominate. Meyer is of course entitled to her opinion, and if she finds the book boring, so be it. I didn’t find it boring.

You can tell from the ratings chart that other readers’ opinions are all over the place: 27% gave it 5 stars, another 27% 4, down to 23% 1 star. IMHO, comments from another reader (“Tom”) are more telling than Meyer’s:

As a well-developed novella, “A Time to Scatter Stones” is a fitting capstone to a long and successful career — if that’s what it is. Like his hero, Block never fails to surprise. The veteran author is gifted enough to leave the door cracked, and because of that, this book both feels and doesn’t feel like the end.

That’s no easy thing for a writer to pull off, but if all we had were this conclusion to Scudder’s story — replete with Block’s Craver-esque ear for dialogue and enough nostalgia from novels 1-18 to bestow authenticity — it would be a satisfying end.

Yet here’s hoping there’s more to come, even while knowing that if Block’s recovering alcoholic underworld investigator has yet another surprise for us, it’ll still be one too few.

Matt Scudder is in his ’70s during this book, so I hope that Tom is right.

Now on to Ruth Rendell’s novel, Monster in the Box, another work that feels like it might be the last work in a long series. (Rendell actually wrote two more before she died in 2015.) In case you’re wondering about the title, it refers to one way of coping with an obsessive worry about a fear that won’t go away: instead of letting the monster sleep under your bed, you figuratively put it in a box and seal the box. A large chunk of this book consists of Wexford’s obsessive thoughts about his first murder case as a young police detective, interspersed with current events. The flashbacks and internal monologues keep readers on their toes.

In contrast to the amateur reviews of Block’s novella on Amazon, 32% gave Rendell’s novel 5 stars, 32% 4, down to only 7% 1 star. Much more consistency in reader opinions here. To the extent that there is significant disagreement, it mostly revolves around the social commentary that threads through the plot: social commentary about political correctness, the role of women, family structures, parental control, integration of Muslims into Western culture, and so forth. A lot of that could perfectly well be happening in the U.S. today, with only a slight shift in the particular Muslim ethnicities in England versus here and a slight difference in the particularities of the issues. For instance, arranged marriages, genital mutilation, and honor killings aren’t big issues in the U.S. But note this article in this morning’s New York Times:

A British court has sentenced a 37-year-old Ugandan woman to 11 years in prison for the genital cutting of her 3-year-old daughter, after a landmark conviction last month. The judge on Friday sentenced the woman, who last month became the first person in Britain to be convicted of the crime…

Reading Monster in the Box must be a different experience for Brits than it is for us, because of stories like that.

Those of us who have read dozens of Rendell’s novels (both under her own name and under the Barbara Vine pseudonym) will also not be surprised that there’s a lot here about criminal minds.  But I go away with the strong feeling that both Rendell and her protagonist are primarily looking back on the past, partly from within and partly from outside, just as is the case with Larry Block’s book. Maybe it’s just me.