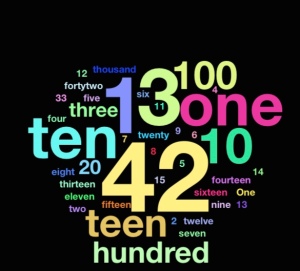 Like many of you, I grew up learning the traditional rules about when to write out numbers in words and when to use numerals. Most professionals continue to use these rules today, as in the following awkward paragraph from Talking Points Memo:

Monmouth University’s survey of Iowa caucusgoers found Biden leading the field in Iowa with 27% support, Sanders at 16% and Buttigieg with nine percent — a notable rise given how few voters know about him at this point. They were followed by Sen. Elizabeth Warren (D-MA) and Sen. Kamala Harris (D-CA) at seven percent apiece, and former Texas Rep. Beto O’Rourke (D-TX) at six percent, with the other candidates below five percent support.

Note, for example, the words for “nine percent” but the numerals and symbol for “27%”; that‘s the way I’ve always done it too. You’re supposed to spell out numbers less than or equal to ten but not numbers greater than ten. There was, I’m sure, some obscure reason for this rule, but in the long run the justification was like most of the rules of style: “do it this way because I say so.”

But now the Associated Press Stylebook — one of the three most popular stylebooks — has changed its collective mind. (At least) two linguistics bloggers have picked up on the improvement. One is James Harbeck, whom I usually read in Sesquiotica but in this case is writing in The Editor’s Weekly, where he writes a regular column. Here is an excerpt (read carefully!):

About sixty percent of those present gasped when one of the recommendations was made — in fact, it might have been 70 percent. No, I’m going with 80% of those in attendance. But it made perfect sense to me.

The change they announced was allowing writers to express percentage with % rather than the spelled-out percent. They also debated how far to go in the handling of numerals in general: Do they dare recommend using numerals even for numbers below 10?

For me, the answer has been obvious for twenty-five years. Back in the mid-nineties I was teaching preparation courses for standardized tests. In some sections of some tests, you had to answer questions about a passage of text. The important thing was to check your facts. It quickly became obvious that proper nouns and numerals were much easier to find than other details, especially under time pressure. So half a decade later, when I found myself in charge of style for a website that provided medical information (such as medication dosing), I knew what I had to do.

Okay, I hesitated a bit. I was strongly conditioned by counsel on readability from the most revered style manuals, so I went with spelled-out numbers below 10 for things such as days and weeks but used numerals for doses: “Take 3 times a day for nine weeks.” Obviously, that was a silly mess, so by 2006 I went with all numerals all the time (except where a 1 might look like an l).

The other linguist who has recently published on this subject is Steve Dodson, who writes a blog with the odd name Language Hat. But I’ve just learned that it’s not so odd after all, and this post shows why. It turns out that Dodson wears several hats, and only the linguist hat is relevant for the blog in question. But in real life he is a copyeditor (here in Massachusetts, no less), which makes today’s topic a particularly appropriate one. Dodson hands the hat to another copyeditor, Merrill Perlman, who focuses on diacritics, the spelling-out of percent, and the peculiarities of Latinate words in English such as data and sic. Do read the piece, even the comments.

By the way, looking at the title of this post, which form do you prefer? I prefer “5% discount,” though I can live with all of them except the last: “five % discount” just looks barbarous too me, even though I never want to be a prescriptivist

‹ Excellent carpentry, Verizon!
The Israeli election, consciousness-raising, a potential Nobel Peace Prize winner, the college admissions scandal, the U.S. constitution, and mostly a Sierpinskitasch — all in one post ›