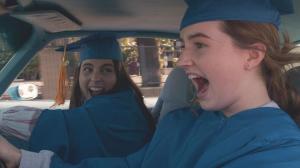 Anyone who has been to Weston High School or a similar suburban school — whether as a student, a teacher, or a parent — will appreciate the new movie Booksmart.

If you’ve been to a suburban school in southern California, so much the better. This film is very SoCal. If you haven’t heard the basic premise, it’s a coming-of-age comedy about two BFFs on their last night in high school; both are super-intellectual nerds, and one has been out as a lesbian since tenth grade. As you would expect, they’re types. But they’re also individuals. Unsurprisingly, I learned about Booksmart from the podcast Nerdette, which I also recommend, independently of the movie. Apparently I’m supposed to have heard of the director, Olivia Wilde, but I haven’t (other than the mentions on Nerdette).

Parts of the cinematography remind me of Federico Fellini’s great film Juliet of the Spirits, though I haven’t seen this claim mentioned anywhere else. In any case, the frenetic pace and hallucinatory elements are appropriate for both movies.

The protagonists are both excellent actors and convincingly play high-school students. Like most actors in such situations, they are slightly older than their characters, but that works well — especially since one of them is clearly portraying a senior who is 18 going on 28. We all know the type.

Now here’s where I’m supposed to include a warning about the R rating. It didn’t bother me at all, and in fact it was a necessary component of making this movie, but if you’re bothered by such things you are forewarned. I don’t want to commit any spoilers, but I’ll just quote from the review published by Focus on the Family, a review that of course contains a lot of critical remarks as you might expect. They start by clutching their pearls:

Amy’s parents are portrayed as Christians who are fully accepting of Amy’s same-sex attraction.

Molly is jokingly called a “Philistine,” and she meditates to self-improvement audio books. A young woman says that after losing her virginity in a graveyard, “spirits live inside of me.”

Amy and Molly have an in-depth discussion about pornography, and Molly shames Amy for never having seen any of it. So, in an attempt to learn about same-sex intercourse, Amy and Molly watch pornography together in the back of an Uber.

Actually, it was a Lyft, not an Uber. So much for attention to detail. (Booksmart pays an enormous amount of attention to details, from little bits of language to the bumper stickers on the cars.) More shocking details from the review:

Girls wear short shorts, revealing tops and bikinis. Guys are seen in swim shorts. Girls and guys dance with one another, flirt and kiss.

The n-word is voiced once in a song. A high school student is called a “wench.” Two teens use crude hand gestures.

Various parties take place throughout the film, and many of them involve underage drinking. Teens consume beer, hard liquor and champagne. A teen girl smokes cigarettes.

Adults (including teachers, principals and parents) cross significant, inappropriate adult/child boundaries throughout the film. A teacher drives Molly and Amy to an unsupervised house party and confessses previous “dark moments.” The school principal takes Amy and Molly (as their Uber driver) around town, all the while affirming their poor choices. Amy’s parents don’t ask any questions when she wants to leave for the night.

OK, enough! If you can’t handle all that, don’t see the movie. Otherwise, go see it!

‹ Supreme Musical Artists of the Past Fifty Years
Interpreting a sign ›