Home › Books › Intertwingled/“Hypertext in the Age of Trump”

Intertwingled/“Hypertext in the Age of Trump” 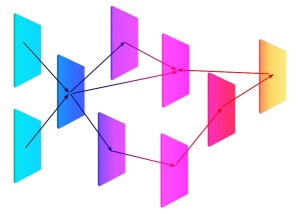 No one could ever say that Bernstein is shy about expressing his opinions, so don’t expect some dry attempt at scientific “neutrality.” If you tackle this short book, you will learn a lot about the history, theory, and (perhaps) future of hypertext, all expressed through the lens of one of its principal developers. The nine essays were originally “notes” for the 30th ACM Conference on Hypertext and Social Media, a fact that immediately alerts you to the intended audience: those who would attend such a conference. In other words, we’re talking about fellow software developers, hypertext authors, and perhaps the interested but knowledgeable public. If you fall into any of those categories, you will find much to capture your attention in these essays. If you’re only interested but not knowledgeable, you will find that much of the prose is tough sledding — a bit like reading a college textbook for a course that you really wanted to take but found that you were just barely qualified for. (Fortunately there’s a glossary at the back.) The exception is the ninth and most important essay, “Hypertext in the Age of Trump,” a dark meditation on the future of the world in the current political climate. You’ll understand that one all right. It is echoed in a paragraph in the foreword:

Our planet is burning. Our electronic networks, one of the crowning glories of our civilization, are crammed with the ravings of fools and the counsels of con men. Many of our governments are controlled by senile knaves or irrational zealots. Many of our best young researchers dedicate themselves, knowingly or otherwise, to those who subvert and deny science, in the (usually vain) hope of attracting the notice of a handful of platform vendors who might hire them.

As I say, Bernstein is not shy about expressing his opinions.

He’s also not shy about telling us when he had been wrong (I wish everyone could do that). For example:

I believed (correctly) that legislators did not understand the questions they were called on to decide, but I assumed wrongly that legislators minded this state of affairs and would be eager for a better way. In practice, legislators don’t want to understand, or even to arrive at the right decision: legislators want to win the next election. Upton Sinclair, campaigning for governor of California in 1934, observed that “It is difficult to get a man to understand something, when his salary depends upon his not understanding it.”

One of my (white) former students posted some comments on Facebook yesterday concerning the controversy about the ComicCon ban on blackface cosplay. For example: “If I want to cosplay Storm, I could, and I don’t need to do any raceface to make it obvious who I’m cosplaying.” This issue arises in hypertext fiction just as it does in cosplay, as the reader of a hypertext story may be able to pick the race and gender of a character. The right path isn’t clear:

This approach implicitly argues that race (say) doesn’t matter, that we might casually don a race or a gender like a suit of clothes. That might be a world to which we aspire, but it is not the world we have known.

Or, as Bernstein points out, it might be a story where race does matter, as in many stories we have read (and lived). The connection with cosplay isn’t accidental; both GamerGate and D&D make appearances in this collection.

The sole work of fiction in this collection, “Ophelia in My Pocket,” was a mystery to me. Not in the sense of being a detective story, just in the sense that I have no idea what it’s about or how I should approach it. In contrast to the final essay, it apparently assumes some sort of prior knowledge, some esoteric context, that I don’t have. Oh well, I’m probably not the intended audience for this story. That’s OK; the rest of the book totally made sense to me.

Finally, be sure to read the concluding essay, “Hypertext in the Age of Trump.” As I said above, you don’t need a technical background for that one. In addition to its appearance in this collection, Bernstein has also published it separately, so you can read it (for free!) online. Every day I become more and more convinced that the current situation is untenable, but I am an eternal optimist (in distinct contrast to Bernstein). And what does hypertext have to do with Trump? You’ll just have to read the essay to find out.

Disclaimer: Mark and I have been friends for so many years that I can‘t even remember when I met him.

‹ Graphing calculator prices: how TI cornered the market
The bathroom is finally finished! ›