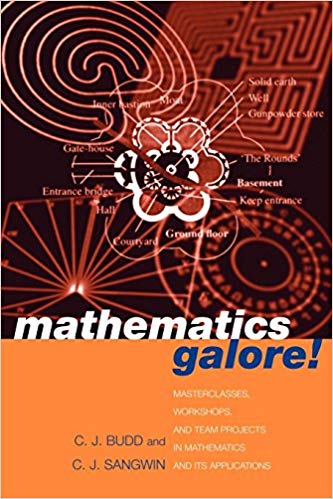 audiences of young people, their parents and teachers, with the wonder, excitement, power, beauty, and relevance of modern mathematical ideas.

So it says in the introduction to Mathematics Galore!, by C.J. Budd and C.J. Sangwin. This book gives you an in-depth overview of eight math masterclasses for British 14-uear-olds, along with class summaries, problem sets, answers, extensions, and references — altogether a valuable reference for anyone thinking of using the material or just being inspired to use other topics to venture outside the box of standard math curriculum. Before we go any further, let’s look at the eight topics, one per chapter:

I will briefly discuss chapters 6 and 7 (no surprise to anyone who knows me).

After approaching Chapter 6 with high hopes, I was disappointed to find my hopes deflated. The trouble may be the fact that I’ve taught cryptography literally dozens of times to various groups of students at Weston High School, Crimson Summer Academy, and elsewhere. That gives me a lot of expertise but too many opinions. Anyway, the reality is that I’m coming carrying the baggage of both of these. WIth that caveat in mind, we can look at the chapter. It starts with the Enigma machine, a good motivational tool but perhaps not at an appropriate level, since it’s too difficult for an in-depth look and we’re left with a superficial treatment. Then we turn to Caesar ciphers in depth, and some modular arithmetic, and substitution ciphers, and VIgenère — just as I do in my courses, and in the same order. So far so good, except that the authors make the egregious pedagogical mistake of teaching the 26-by-26 square for VIgenère (which they misspell, BTW) rather than using modular arithmetic, which they had already introduced. Yes, it’s remedied in the problem set, but what a missed opportunity! Finally there’s a brief look at transposition ciphers, and some suggested exercises and activities, such as a field trip to Bletchley Park (they are in England, after all). Of course there are literally hundreds of ciphers from which they could pick, and this selection is certainly reasonable… except… for a book published in the 21st Century, where is public-key cryptography (RSA and all that)? I know, I know, it’s very difficult and too time-consuming, but shouldn’t there have been at least a glimmer of the #1 most important use of cryptography in our time?

Chapter 7 is much more satisfactory (IMHO). Its title, “What’s in a name?” Is deliberately vague, but it turns out to be about number bases, how we write numbers, historical number systems, the difference between numbers and names of numbers, and so forth — all up my alley. It’s all deeply fascinating to me, and the chapter includes many things that I have taught, such as the ancient Egyptian, Greek, Maya, and Babylonian number systems. These are all handled briefly but certainly competently. It also includes a very brief treatment of something I have never taught: negative bases.

All in all, a good start.

Oh. You’re probably wondering what Chapter 2 is all about. Dancing with mathematics? It’s group theory, of course — and has a lot of good stuff in it.