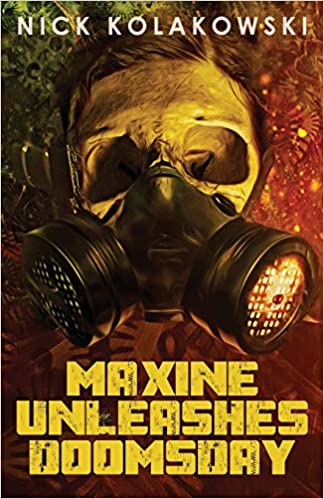 How could I resist a novel with a title like Maxine Unleashes Doomsday?

The genre of this story, as you expect, is near-future post-apocalyptic science fiction — more or less. Apparently it was inspired by The Road Warrior, but I’ve never seen that movie and have no desire to do so; apparently it’s not necessary for understanding the story. (Or so I think, but what do I know?)

Anyway, it’s almost always quite clear what’s going on the story, at least if you’re accustomed to some of the conventions of science fiction and are willing to wait patiently for the “world” to reveal itself gradually rather than being explained didactically. In particular, author Nick Kolakowski paints a world that is not very different from New York State in 2020, with a few obvious extensions such as an overwhelming predominance of driverless and electric cars, a rise in sea-level that has flooded much of lower Manhattan, vast improvements in artificial intelligence, and a breakdown of civil order that leaves law enforcement in the hands of private security forces.

Some reviewers have been confused by the timeline, since the setup is that scientists in 2110 have extracted the story from the brain of the long-dead eponymous Maxine. But the narrative itself, coming from her memories, takes place in the 2040s, not in 2110. The pace of this narrative is rapid without being breathless, characters are well-drawn, and conflicts are none too subtle. Kolakowski has crafted a multi-level but not multi-threaded plot; there’s really just a single arc that goes from the beginning to the end, so you might be tempted to read too quickly. I suppose the pace could encourage you to commit this error. But then you would miss a lot of the fine details, like those in this paragraph:

Maxine knew the place from her convoy-escort days, when she had guided a few trucks this far north. It featured a pretty decent fast-food restaurant (as long as you pretended the deep-fried kelp burgers really did taste like beef) along with eight charging stations, two cheerfully retro gas pumps, a barbed-wire perimeter, and a platoon of rent-a-cops keeping the peace. She might have been broke, but Brad had a thick wad of U.S. twenty-dollar bills (the new ones, with Harriet Tubman’s face on them), because he had never trusted e-money.

One more pair of details about what has happened to northern New York: an Indian casino has become the major economic force (maybe it is already?), and the New York Giants have given up as an NFL team in order to be mob bosses in organized crime. The latter seems less likely, but what do I know?