Home › Linguistics › How many languages are missing from the internet?

How many languages are missing from the internet? 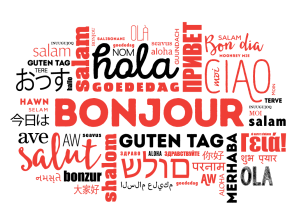 One day in the early ’80s, when very few people had even heard of the internet, I was reading an online discussion about computer programming projects in Logo. A certain angry participant got very upset at a contributor from Montreal because she had posted a comment in French. He replied “This is the INTERNet! Use English!!!!! It’s called the INTERNet because it’s INTERNational!!!”

Yes, that’s wrong on so many levels. Aside from the erroneous etymology of “internet,” and the ethnocentrism, there’s the claim that international means English.

Today there are posts in many languages, and no one would blink at an eye at a Canadian who posted in French (I hope). But a great many people do not find their own language represented on the internet. The BBC recently had a short but very informative article on this subject; read it!

What? You don’t want to read it? OK, then here are four highlights:

‹ The Misadventures of Nero Wolfe
Languages change. Don’t be a peever! ›