Home › Life › On not playing poker

On not playing poker 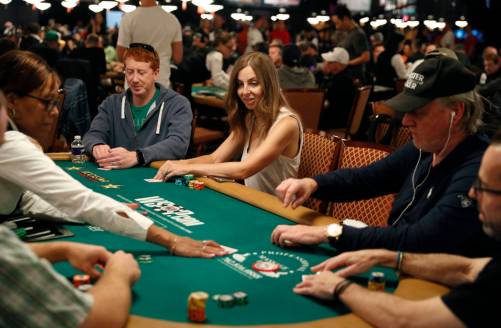 Can a psychology Ph.D. who has never played poker before become a championship poker pro?

Apparently so! Maria Konnikova has been making the rounds, promoting her new book, The Biggest Bluff. I heard her on NPR and on Freakonomics, but you might have heard her interviewed elsewhere. So, here’s the question: is successful poker-playing a matter of psychology, or mathematics, or a combination of the two? Konnikova definitely falls on the psychology side of the questions. In fact, she calls herself innumerate and says that she took no math courses after high school! With no poker in her background, and no math beyond AP calculus, what changed her life so that she could become a championship poker pro? Here’s what she says in her Freakonomics interview:

I think I’ve had a lot of very lucky things happen along the way. But you asked the absolute luckiest. And you have to think what really changed the trajectory of your life in the most profound way? And honestly, being a Jew in the Soviet Union — this was before the Berlin Wall fell — was no fun. I would not have been a writer because you really couldn’t do anything in the humanities. I can’t even begin to imagine what my life would look like.

And so, her family emigrated to Acton, and then came Harvard, and then Columbia… and a Ph.D. in psychology and then poker.

How does all that lead to a national poker championship in only one year of studying and playing???? You can read her book, or listen to her interviews, or just read secondary sources — there are a lot of options. No spoilers here. But I do want to raise a related question about Star Trek (I’m writing a different post about Star Trek, which will come out soon, and it seems that every topic relates one way or another to Star Trek): While recently watching old episodes of Star Trek: TNG, I noticed that both the android Data and the empath Deanna Troi play poker with humans, and I couldn’t help wondering how that is fair, both for mathematical reasons in Data’s case and for psychological reasons in Troi’s. Any answers?