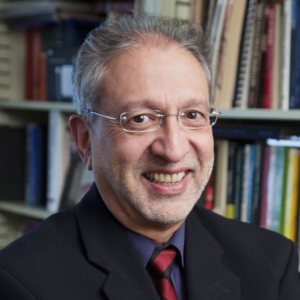 Pronouns — as well as other linguistic tidbits — continue to be an issue far beyond what one might expect. Linguist Dennis Baron continues to be the primary authority on the topic of pronouns, and only partly because of their new book, What’s your pronoun? Take a look at their picture (which might be on the right or above this paragraph, depending on your reading device). Can you tell their preferred pronouns at a glance? Can you tell their ethnicity? Their age? Their religion? Their gender?

I can’t predict your answers, though I can guess.

But first: did my use of “they” and “their” bias your answers?

I’m guessing that you might suspect from the photo that Baron and I share many of the same characteristics: the same gender, preferred pronouns, approximate age, ethnicity, and probable religion. All that from a photo and a name?

Or maybe you’re more cautious and don’t want to reveal your guesses.

Earlier this month Baron wrote a post called “Pronouns on TV: pop culture meets inclusive language.” I’m not especially interested in TV or pop culture, although you probably are (“probably” being based solely on general statistics). So no TV and no pop culture, but I’m interested in inclusive language. And pronouns. So I found a lot of fascinating material in Baron’s post. I’ll write a little about it here, and then you can go and read the whole thing.

The main issue is gender-neutral pronouns. I was taught in middle school that “the male embraces the female.” Seriously! That was how we were supposed to remember to say “he” instead of “he or she.” Nobody brought up the idea of inventing new gender-neutral pronouns, although we now know from Baron’s essay — and from what I wrote about last month — that they existed long before I did. And today they actually are making inroads into Swedish. 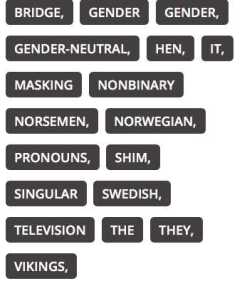 By the way, some of the actual answers to my initial questions might surprise you. Like me, his ethnicity is partly Romanian Jewish (half in his case, one fourth or one half in mine), but the other part is very different (South Asian in his case, Russian Jewish in mine). You probably can’t tell these ethnicities from the photo, so don’t leap to conclusions! But yes, he is about my age and is male; I don’t know his religion. Likewise his preferred pronouns. As you see, I used they/them/their in the first paragraph and he/him/his in this paragraph. We’ll have to read What’s your pronoun?, Baron’s book that I referred to in my first paragraph above, to find out.

Stay tuned for my upcoming review of that book, coming soon to this station.