The Answer is… “Who is Alex Trebek?” 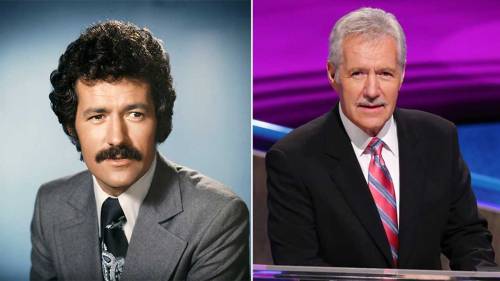 More specifically, it’s not the title of a book: it’s a portmanteau of the titles of two books:

Each one is a biography of Alex Trebek. The first, as you can tell, is actually that peculiar form of biography that we call an “autobiography” — or perhaps it’s a memoir. (Hard to tell the difference.) I listened to it in audiobook form, which led to an odd problem: 90% of the book is actually narrated by Ken Jennings, whose voice we know well, even though nowhere near as well as the voice of Alex Trebek. It was continually jarring to hear Ken speaking in the first person when “I” referred to Alex, but eventually I got used to it. The only parts of the book narrated by Alex himself were the intro, the conclusion, sections about Alex’s romantic life, and sections about Ken himself. All of those would have been awkward (at best!) if told in Ken’s voice. So it was the right decision. I am assuming that Alex’s health did not permit him to narrate a full-length book.

If you are expecting that the two books contradict each other, you will be disappointed. Of course there are a few details that do contradict, but those are really rare. By and large the differences between the two books are the inevitable ones, some caused by first-person point of view vs. third-person, some just a matter of emphasis and choice of topics. Of course Alex’s own book gives you more insight into his mind, whereas Rogak’s book tells you a lot more about his non-Jeopardy experiences. The two combine to give a new picture of Alex’s political views; I had always assumed that he is a Republican (like Pat Sajak), and clearly he used to be one, but the sensibilities revealed in both books show someone who fits in much better with today’s Democratic weltanschauung. [You can look it up.] His respect for experts, his devotion to truth, and his deep empathy (especially with people in Africa and elsewhere who live in poverty) all separate him from Donald Trump’s party. You don’t see much of the empathy on the television show, but it shines through loud and clear in both books.

A few closing remarks: First, I have a number of friends who majored in philosophy in college, and I suspect they would all be surprised and puzzled by this sentence about 19-year-old Alex in Rojak’s book:

He was still stuck when it came time to pick his major, but his precarious financial position dictated that he settle on philosophy.

Huh? That sounds pretty implausible! If you are financially precarious, why would you pick philosophy of all things? But read the two sentences that follow that one, and you’ll find out how that apparent paradox is resolved:

Philosophy classes were offered only from nine to noon each morning… Alex’s schedule meant he could work a full-time job in the afternoons to make enough to pay room and board and tuition, which was $500 a year, a significant amount of money at the time.

Finally, a great story with an important moral for teachers:

Station managers across the country were complaining to King World that the questions and answers on the show were too difficult, ones that stumped the average viewer. They asked King World if the writers could dumb down the questions, and Alex and the other producers said they would.

A few months later, the same stations that had complained were now getting in touch to thank the producers for making the questions easier, but Alex and the producers just laughed, because they hadn’t asked the writers to simplify the show; instead, the various station executives only thought they would be easier, and so that’s what they chose to see.

‹ National Museum of Math: new comments
How do I know that they know? ›