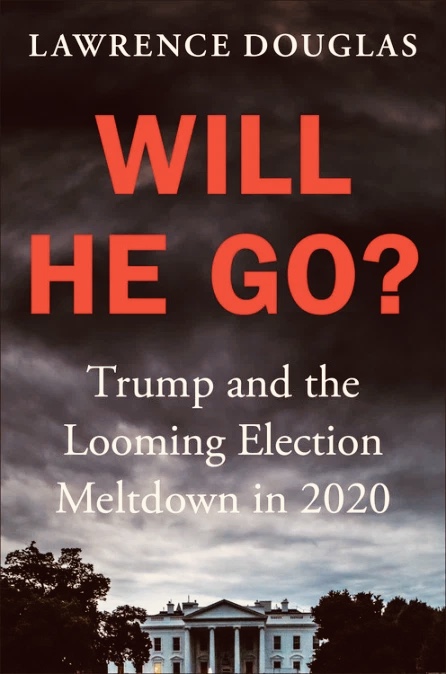 Will he go? Of course he will!

He says he’s “not sure” that he will accept the results.

I have just finished reading the short but vital book by Lawrence Douglas with the full title of Will He Go? Trump and the Looming Election Meltdown in 2020. Yes, it’s worth reading, but here’s the thing: who is the intended audience????

Clearly I’m not. The book is divided into two parts, and I literally could have written the first part myself. And I mean “literally.” Everything in it is material that I have taught many times in my Quantitative Reasoning class: Electoral College history, Ranked Choice Voting, Trumpism, the role of legitimacy, etc. Douglas is thorough, accurate, and oh so relevant; Part One is useful for the 99% of Americans who don’t already know this material.

So I’m not the intended audience. But that only matters for Part One. It almost seems that Part Two was written by a different author. I don’t really mean that, but it feels that way. The first half was clearly written by a college professor (Douglas teaches law and jurisprudence at Amherst) and reminds me of the #1 best course I took as an undergraduate: even though I majored in linguistics and focused heavily on classics and computer science as well — not that CS existed back in the ’60s, when there was no such discipline and it was all buried in either applied math or engineering — despite all that, the single course that I learned the most from was a freshman General Education course called “Western Thought and Institutions,” taught by Sam Beer, emphasizing a mixture of history, political science, philosophy, and sociology. One of Beer’s lines that I remember to this day was “The Constitution is not a suicide pact,” a quote that is deeply relevant to Douglas’s book. So the first half is scholarly, maybe a bit dry but still engaging. Far more engaging is Part Two, some of which reads like a John Grisham thriller (though still informed by research and evidence, complete with plenty of endnotes, just like Part One). In Part Two we consider three different scenarios for the election and the interregnum, plus some grounds for hope. All three scenarios envision a Biden victory, but with important differences: different statistics, different election circumstances, and different responses from Trump. The three scenarios include:

In all three cases, the Big Question is whether Trump will leave the White House. Don’t expect gloom and doom from Douglas’s book, but don’t expect easy solutions either. The best solution, of course, would involve a massive victory by Biden — so massive that none of the posited scenarios will come to pass or will have any effect if they do.

We can only hope. Keep your fingers and toes crossed.