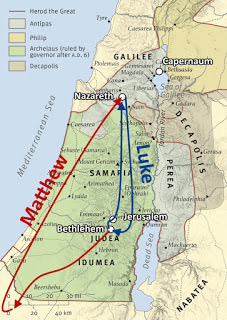 Raise your hand if you have personal knowledge of the true story of the Nativity.

OK, most of us were not there at the time, Connie Willis to the contrary notwithstanding, so we have to rely on the words of experts — and the evidence they provide. (Sorry to have to mention the words “experts” and “evidence” when we’re still in the reign of King Donald I.) Turning to the words of Peter Gainsford, the Kiwi Hellenist, is a recommended first step, especially since he just published a substantial post on the subject.

Yes, he’s a New Zealander. Does it matter? At least it means he won’t catch COVID.

I learned a huge amount from Gainsford’s post, and since I seem to be focusing a lot these days on the world of the ancient Mediterranean lands it makes me wonder why I had known so little before. Let’s first talk about a couple of the issues in the post, and then we can turn to tenth grade, where it all started. (OK, that’s confusing. Obviously the Nativity did not start in tenth grade; that was just when I started learning about the subject. I didn’t go to Hebrew School — but obviously it wouldn’t have discussed there anyway.)

You should definitely read Gainsford’s entire post, but I’ll point out five bullet points before you read the post and look at the evidence presented:

So what happened in tenth grade? Well, we had a nominally required course in the Bible in that grade. I say “nominally required” because the Program of Studies at Phillips Academy claimed that it was required, so I duly signed up for it. Months later I found out that there was an unwritten rule (amazing how many of those there were, considering that we already had a whole book filled with the written ones) that said that tenth graders (called Lower Middlers, not sophomores, of course) could be exempted from Bible if they were taking a second foreign language plus either a history or a science course. At the time we were allowed a maximum of five courses per year; sophomores (excuse me, Lower Middlers, or Lowers if you wanted to be informal) already had to take English, math, a foreign language, and Bible — so there was no room for a second foreign language and history, or a second foreign language and science, or history and science. I took both Latin and Greek, but I could have added Biology if I had only known that I could replace Bible with it. Hence I took no biology in high school, though I did take one semester of it in college (limited to genetics and animal behavior). Also, for similar reasons, no chemistry; that’s a story for another day.

But I digress. As a good rule-follower, I took the Bible course; the teachers were the school’s two ministers, Graham Baldwin and Fred Pease. Although they were both good Protestants at this oh-so-traditional private school, they were anything but orthodox in the usual senses of the word. Reverend Pease, in particular, was famous for picking up the Bible on the first day of class, throwing it on the floor, and saying “Some of you probably think that this book is sacred. Bullshit! It’s a book, like any other book, and we’re going to study it like a book.”

That sort of iconoclastic behavior, however, went only so far. When I privately asked Rev. Baldwin why chapel attendance was required, even for Jewish students, his only reply was that if it weren’t required, no one would attend — and anyway, the services were “non-denominational.” I asked him what he meant by that adjective, and he said that they were a combination of Episcopal and Presbyterian.

Anyhow, I did learn a fair amount about the Bible that year, both Old and New Testaments. A fair amount, but not nearly enough. I certainly never learned all that information that I refer to above; it would have been useful in so many ways, not just in doing crossword puzzles and watching Jeopardy.