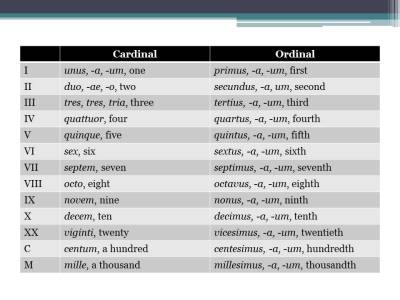 So you’ve never heard of the name Quartus?

I’m not surprised. Almost no one, after all, is named Quartus.

Peter Gainsford answers the question—and other questions as well, most of which you didn’t even know you had. But deep down you must have had the questions, just as I did, and Gainsford answered them in the annus horribilis, the otherwise traumatic year of 2020. (Not that 2021 is doing so well either, but it will probably improve after the 20th.)

I guess it’s hard to find the time to get around to thinking about why Romans had names that meant ‘fifth’, ‘sixth’, and ‘tenth’. If you do think about it, you’re likely to make the same assumption that I did: that children were named for the order in which they were born. The 1st son would be Primus, the 2nd Secundus, the 3rd Tertius, and so on.

But that isn’t the case. If it were, we’d see corresponding names for the first to fourth children. And they just don’t exist.

What a mystery! You’ll just have to read Gainsford’s complete piece to find the solution. It’s surprisingly fascinating, and it’s not too long, though it goes into much more depth than you might expect, given the apparent shallowness of the initial question.

You’ll be a better person for it.

‹ The road to hell
A number theory discovery by a 12-year-old Nigerian boy! And one by an 11-year-old Massachusetts girl! ›