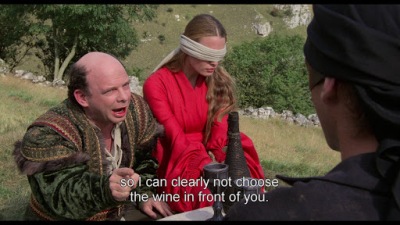 “Never get involved in a land war in Asia.” That’s the line I’ve remembered for more than three decades.

Yes, it has been that long since The Princess Bride was first released! How well has this movie held up?

Amazingly well, I would say. Naturally I forgot a lot of it, though I never forgot the scene in the image above, which keeps popping up whenever I prepare to teach a game theory unit in a math class. And of course I remembered “My name is Inigo Montoya. You killed my father. Prepare to die.” I also vaguely remembered the story-within-a-story structure. What I didn’t remember was how very Jewish the movie is—at least for something that no overt Judaic references. Of course we have author William Goldman, director Rob Reiner, and actors that include Wallace Shawn, Mandy Patinkin, and Billy Crystal, whose character sounds exactly like your grandfather (depending on who your grandfather was, I suppose). I’m sure there are several other Jewish actors in the film, but names and characteristics of actors are not really in my knowledge base.

There is a prophetic line that of course I hadn’t remembered:

Masks are terribly comfortable. I think everyone will be wearing them in the future.

That certainly means something different today!

Finally, Peter Cook’s brief role was meaningful to me in 1987 for reasons that won’t be familiar to most of the readers of this blog. Although you’ve seen him in plenty of roles, you probably don’t know his satirical sketches in the comedic stage revue Beyond the Fringe, the LP of which was a favorite among a small group of my friends in high school (“small group” and “friends in high school” being redundant). Cook’s impression of a clergyman in The Princess Bride was obviously inspired by Alan Bennett’s clergyman sketch in Beyond the Fringe, a distinguished group of young British comedians that also included Dudley Moore and Jonathan Miller and was clearly the predecessor of Monty Python.

The Princess Bride is a modern-day fairy tale that is well worth re-watching.

‹ The new Historical Dictionary of Science Fiction
Why do physicists play dominoes? And what’s the connection between the Aztecs and the Arctic Circle anyway? ›