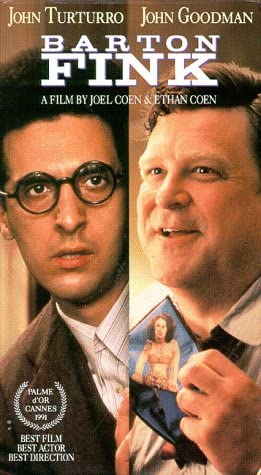 The Coen brothers, I decided, deserved one more try. They do have a stellar reputation, after all.

After disliking Fargo, Raising Arizona, and Blood Simple, I had almost given up on the Coens, but reviews convinced me to check out Barton Fink and The Big Lebowski.

And maybe Inside Llewyn Davis.

Oh, and I have to watch O Brother Where Art Thou?

I haven’t seen the last three of those yet, but this week I watched Barton Fink. On the whole I liked it—at least enough to keep going with the Coen oeuvre.

My first reaction was that Barton Fink is surprisingly funny. It has a very dark and dry sense of humor, yes, but that’s OK. It’s also surrealistic, in a way that reminds me of Fellini. Because I am almost totally ignorant of Hollywood in 1941—the setting for the story—I have no idea how realistic it is, or how realistic it’s even supposed to be. The plot, the setting, the characters… all of these fit the time and place. The trouble is that I not only know nothing about 1941 Hollywood, I also know next to nothing about Clifford Odets and William Faulkner, who are apparently the models on whom two of the characters are based. I’m also told that the story is indirectly about the rise of the Nazis in general and the Holocaust in particular, though I didn’t perceive that. But what do I know? At least it is a well-crafted, well-acted, and entertaining movie in is own peculiar way.