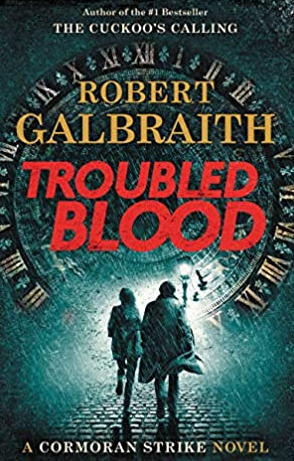 Robert Galbraith has a secret identity, though you won’t spot him changing in a phone booth.

What’s his secret identity? Well, many people know him better by his pseudonym, J.K. Rowling.

No, wait! That can’t be right. J.K. Rowling is a real person, and that’s surely her real name. Isn’t it?

OK, the truth is two-fold. Yes, Robert Galbraith and J.K. Rowling are the same person. But no, J.K. Rowling isn’t Galbraith’s pseudonym. It’s actually the other way around. Rowling adopted the Galbraith pseudonym when she decided to write adult novels that would be judged on their own merits, not because she was the famously successful author of the Harry Potter novels. Unfortunately an unprincipled person in her publisher’s office decided to out her. Fortunately the first Cormoran Strike novel had already received excellent reviews from reviewers who had no idea who the author really was.

So, who is Cormoran Strike, and should you read this particular series? Cormoran Strike is a British P.I.—a Cornish one, to be more specific, and that figures into this latest work—and you should probably read it, with one strong caveat. This series is hyper-realistic, in contrast to Harry Potter. There isn’t a hint of fantasy in it, unless you count the fact that one of the police detectives believes in astrology and tarot (pooh-poohed by Strike at every opportunity). There’s a lot of totally plausible material about Strike’s relationships with his family, his friends, and his business partner, Robin Ellicott. All of these develop from book to book in the series, but you can still read this one without having read the preceding ones. Everything you need to know is there, without hitting you over the head with a back story.

My favorite parts include learning about Fragile X Syndrome (you can look it up) and reading a great scene of a dinner party that includes two self-invited young guests. Galbraith paints the picture so well that you can just feel that you are there! Again, no fantasy—just hyper-realistic conversation and description.

TRIGGER WARNING: I mentioned above that there is an important caveat. Part of the realism is a couple of very unpleasant (but fortunately short) descriptions of violence against women. The violence, of course, is committed by an unalloyed bad guy—who may or may not be the murderer. I don’t do spoilers. If you are prone to nightmares, especially if you are female, you should probably skip the book entirely, as there is no way you can simply excise the disturbing scenes. That is especially true if you listen to the excellent audiobook version, narrated by Robert Glenister, as I did. Glenister, like Galbraith, is so skilled that he puts you right in the action, a virtue for the non-violent 99% of the novel. END TRIGGER WARNING.

Like the later Harry Potter novels, this is a massive endeavor, about 900 pages. I can’t quite say that I couldn’t put it down, since I listened to most of it either in the car or when taking a walk, but it totally grabbed and  held my attention throughout. So be sure to budget enough time if you’re going to read or listen to it.

Finally, a quick comment about a familiar controversy: do you judge a work of art by your view of the artist? I say no; your mileage may vary. You may know that Rowling has been “canceled” by some left-wingers who are troubled by her views on gender, especially her views on trans people. They’re entitled to that opinion, of course, but what they’re not entitled to do is to reject this novel without reading it! A certain misinformed reviewer had read into it some transphobic attitudes that simply aren’t there, which encouraged some irrational “readers” to criticize the book sight unseen! No one should do that.

‹ A really important dispute about “OK boomer”
“Guess the Language”: quite a challenge! ›