Home › Books › The book called The Book—plus a lagniappe: a book about type

The book called The Book—plus a lagniappe: a book about type 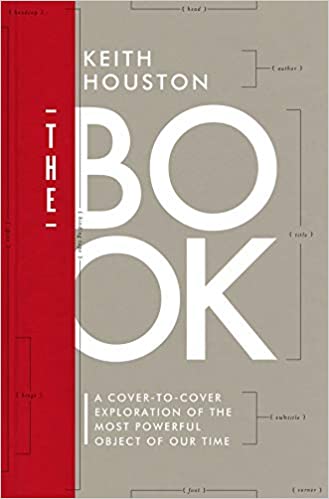 Read The Book in hardcover!

Not in paperback. Nor on your Kindle. And don’t listen to it as an audiobook! The hardcover is essential.

The full title is The Book: A Cover-to-Cover Exploration of the Most Powerful Object of Our Time, as you can see here from the image of the cover. Author Keith Houston writes primarily about the book as an object, which is why a Kindle won’t do.

Because he is writing about the book as an object, there is a fairly long discussion of related matters such as paper (including its predecessors, papyrus and parchment), printing methods, and so forth. Also, more abstractly, the book as powerful content—maybe “the most powerful object of our time,” as the subtitle says, maybe not, but still a magnificently important and hyper-influential contributor to our culture.

There’s something unusual about the cover, as you notice if you peer closely at the image: the portions of the design are labeled, thus merging form and function. In case you can’t read it all, the labels (in roughly clockwise order) are for the head, the author, the fore-edge, the title, the foot, the subtitle, the binding tape, and the hinge—all, I am sure, familiar to the professional book person, but only some to me and probably to you. This practice continues sparingly in appropriate places within the book: imprint, dedication, dingbats, etc.

The 15 chapters take you well beyond the book as object. Each chapter has a title and subtitle, where the title is a clever phrase in initial caps and the subtitle explains it in lowercase. For instance, here are six of the 15:

And—no surprise at this point—there is also a colophon!

If you’re enough of a book nerd that you’re still with me, you may also want to consider a very different but related book: Stephen Coles’s The Anatomy of Type: A Graphic Guide to 100 Typefaces. You’ll note in the image of the cover that this is another book that annotates forms, but here we have the portions of a letter rather than the portions of a book. You can learn more than you’ve ever wanted to know about similarities and differences among various fonts/typefaces. During my brief sub-career as a technical writer I learned a lot about these matters, expanding my original inspirations that came from my childhood, where I had many related conversations with my dad. His own sub-career as an editor gave him some deep knowledge of them; in his case it was a sub-career the lasted for many decades. There’s probably some moral to all of this.