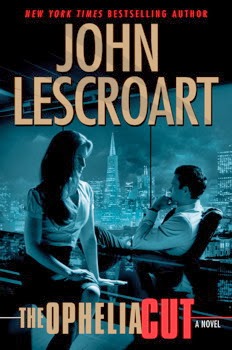 No, you’re not wondering that?

That’s just as well, since I’m not at all sure; there are 14 in all, and they seem to stretch back for a couple of decades. I don’t read them very often, and I know I haven’t read all 14. But I do enjoy them. Admittedly they’re not really literature, but they’re well-above-average mysteries with effective plots, settings, and continuing characters. Most recently I just finished The Ophelia Cut, to which I had mixed reactions.

On the plus side, the familiar characters and the San Francisco setting always bring a warm glow. The plot is generally gripping, with connections to a variety of current issues, including human trafficking, date rape, and dubious FBI involvement with organized crime. The many courtroom scenes are fascinating, at least to those of us who like that sort of thing. The characters wrestle with moral dilemmas.

Ah, but there’s the rub. On the minus side, the moral ambiguities are just not very satisfying. What reader wants a familiar, beloved character to be coming down on the wrong side of a moral issue? I won’t write about the ending, since I don’t know how to do so without spoilers, but suffice it to say that the ending leaves a sour taste in the mouth. I suppose it’s still a good book, but I have deep reservations about it. It’s not that I insist that the good guys should be unambiguously good guys and the bad guys always the opposite, but still…