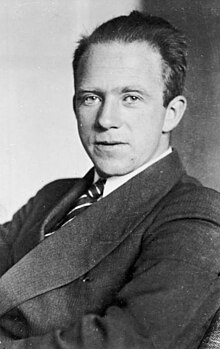 So…it’s hard to avoid telling a bad joke about uncertainty…you know, “Heisenberg and Bohr walk into a bar…” But I’m going to try hard to stay away from such jokes,

Not that the play isn’t amusing. In fact it has quite a lot of lines that are truly funny. “What play?” you ask. “What are you talking about?”

I saw this Michael Frayn play yesterday at the Central Square Theater in Cambridge, where it is currently playing in repertory with Einstein’s Dreams, which I will be seeing next month. The premise is that physicists Werner Heisenberg and Niels Bohr meet in Copenhagen in 1941 [true] and have a long conversation about this visit in the afterlife in 1997 [presumably false]. The conversation is filled with philosophy, physics, psychology, and history, so it’s not exactly a light drama, despite the occasional humor. Unsurprisingly the Central Square Theater is a few blocks from MIT. It’s also unsurprising that the conversation is largely about moral issues around building an atom bomb, the Holocaust, and other contemporary issues for Europe in 1941.

There are only three actors (portraying Heisenberg, Bohr, and Bohr’s wife), virtually no set (just three chairs and a piano on a bare stage), very little plot in the traditional sense, and almost no “action.” Needless to say, it’s very talky. In fact, there’s nothing but talk. Nevertheless, it’s gripping, and the audience’s attention never flags. That’s largely because all three actors do a fine job, but partly because almost everything is in plain language, despite the advanced physics involved. Frayn claims that the words spoken by his characters are all really their own, so his role as a playwright was literally that of a composer, but I’m a bit skeptical. It all seems to be a bit too perfectly dramatic, so maybe we’re not supposed to take Frayn literally.

Anyway, it’s well worth seeing — and thinking about. Go and do both.

‹ The Ophelia Cut
Why he stopped doing interviews for Yale ›