What a mystifying play! Yesterday I went to see Einstein’s Dreams at the Central Square Theater, and I wish I brought Dr. Korsunsky along so that he could have explained the physics to me. A year of honors physics in high school was not enough (especially since it was over 50 years ago). Playing in repertory with Copenhagen, which I reviewed on October 5, Einstein’s Dreams unsurprisingly has exactly the same cast, as well as a similarly spare set, lots of talk, and almost no action. There was only one dramatic scene, when the three actors run into the audience and actually touch and talk with spectators. That was fine, but I wish I had understood more than 10% of the play.

So…as the title suggests…the play is about Einstein, who is the only identifiable character. (The other two are “dreamtellers” — already a bad sign.) We’re talking about the young Einstein, working in the Swiss patent office in 1901, shortly before his famous four papers of 1905, not the more familiar Princeton-based Einstein of the 1930s. That’s why the photo on the left isn’t the more-familiar one from Princeton.

As the title suggests, the play is about his dreams — at least that’s what I assume. It’s based on a 1992 novel by Alan Lightman, so maybe I should read that work and will then understand the play better. Maybe.

In any case, here’s a summary of the plot of the novel according to Wikipedia:

The novel fictionalizes Albert Einstein as a young scientist who is troubled by dreams as he works on his theory of relativity in 1905. The book consists of 30 chapters, each exploring one dream about time that Einstein had during this period. The framework of the book consists of a prelude, three interludes, and an epilogue. Einstein’s friend, Michele Besso, appears in these sections. Each dream involves a conception of time. Some scenarios may involve exaggerations of true phenomena related to relativity, and some may be entirely fantastical. The book demonstrates the relationship each human being has to time, and thus spiritually affirms Einstein’s theory of relativity. 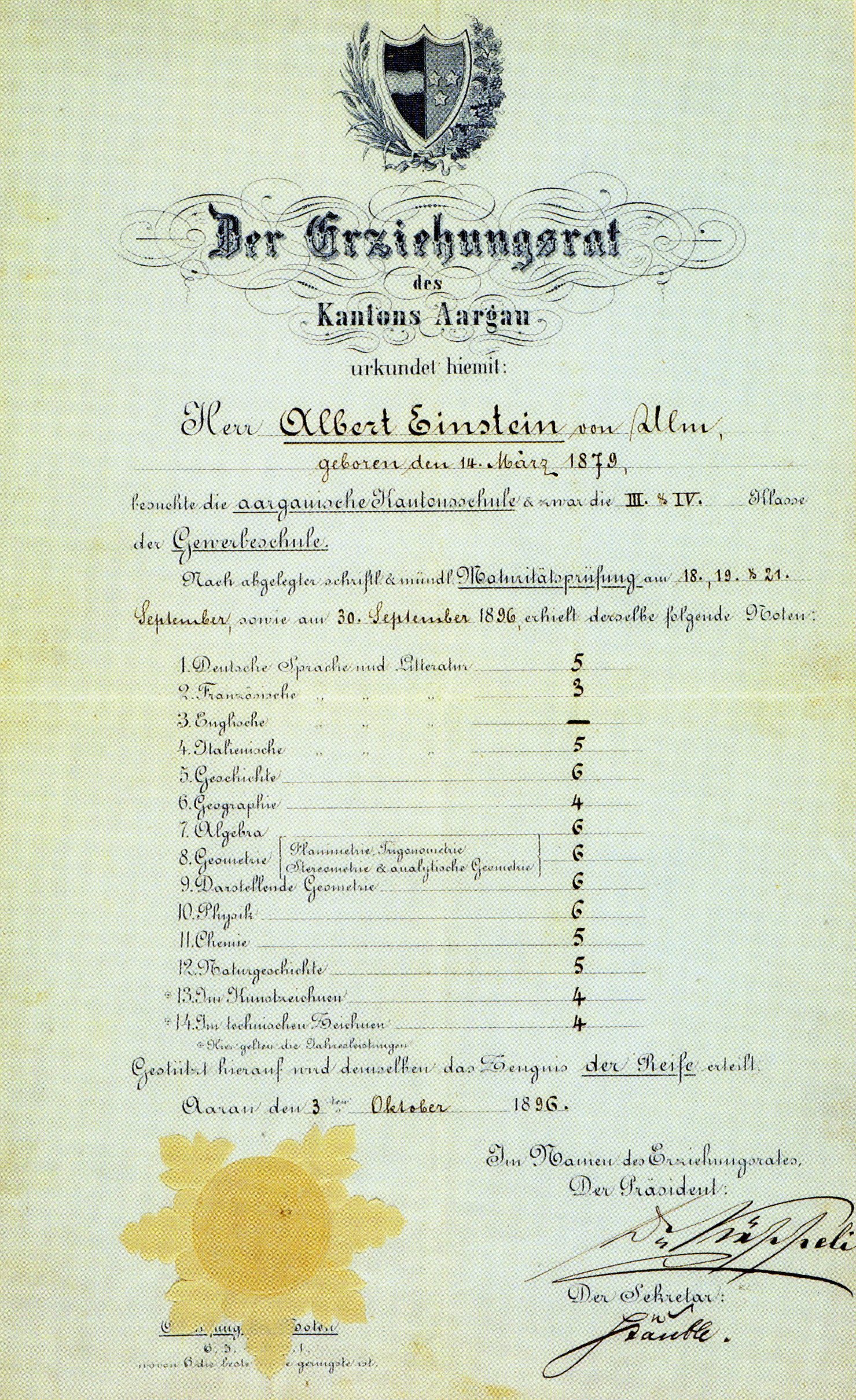 Let’s conclude by talking briefly about the all-too-familiar myth that Einstein got bad grades in math and physics when he was in high school. This pernicious story has had a lot of unfortunate effects on students who think it’s perfectly OK to do badly in those subjects: “After all, even Einstein had bad grades in math.” Makes a nice ironic story, doesn’t it? The only trouble is that it isn’t true. Take a look at Einstein’s actual report card on his graduation from high school:

Yes, I know that it requires some translation, not just because it’s in German but also because today’s readers find it difficult to read German fonts from the Victorian era. Let’s see what I can do. We immediately notice grades of A+ (called 6) in history, algebra, geometry, descriptive geometry (whatever that is), and physics. So much for the myth.

But you may be wondering about the other grades. Einstein earned an A (called 5) in German language and literature; French; Italian (remember that this was in Switzerland, so of course students were required to take German, French, and Italian); chemistry (hmmm…what happened there? probably the chemistry teacher didn’t like Einstein because he once made a rude retort); and biology (natural history, actually). Then there were grades of B (called 4) in geography, artistic drawing, and technical drawing. We can live with that. Even Weston students would be satisfied with such a report card — most of them, anyway.