Home › Food & Restaurants › Back from Manchester (but which one?)

Back from Manchester (but which one?)

No, not that one! Not Manchester, New Hampshire.

Not Massachusetts. (Oh, you’re right, that one is now “Manchester by the Sea.“)

Not Connecticut. Does every state around here have its own Manchester?

We’re talking Manchester, Vermont, of course! Barbara and I just got back from a relaxing mini-vacation there (four days, three nights). Usually I like to do things on a vacation, since I’m not good at doing nothing, but this time it was a real vacation. If you haven’t been to Vermont, here’s what it’s like, according to the state tourism folks: 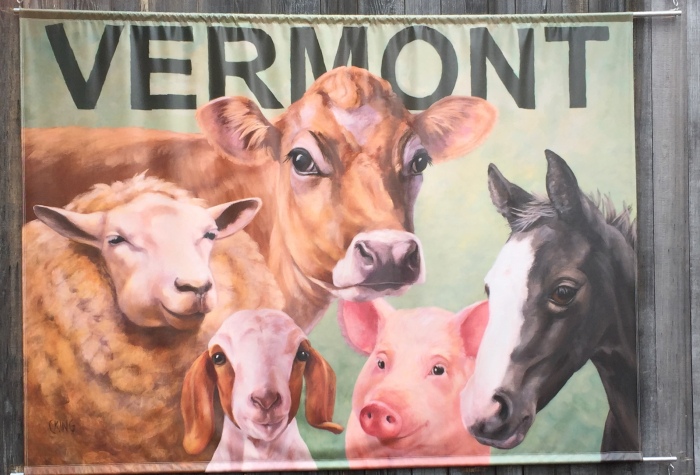 But it turns out that it’s not just farm animals. There are people there as well (and not just Bernie). We visited our old friends, Herb and Cathy, who have disproved another stereotype: the idea that it’s too cold in Vermont to grow peaches! Their peach tree has produced an abundant supply of delicious fruit.

Speaking of food, we decided to make this a luxury vacation since it was so short. So we indulged in fine dining every night. All our dinners were outstanding:

All three, as I said, provided outstanding dinners; all three were eclectic, with food from various locations around the world where the respective chefs had lived; all three were welcoming and gracious. This was exactly what we needed for a mini-vacation!

The other factor that turned these four days into a luxury experience was the inn where we stayed: the Reluctant Panther. Let’s start with some views of the beautiful grounds:

You probably can’t tell from the small image, but the bridge on the right is painted purple! In fact, there were purple accents everywhere, including wood trim and shutters.

And now let’s head inside.

OK, enough of all this extravagance. Although our room for three nights, plus our three dinners, ended up costing as much as we would normally spend on six of each, we rationalized it by realizing that it was our only real vacation this summer — and the total cost wouldn’t be any more than we would usually spend on a six-day vacation.

‹ The War Room
The Fight for English ›