Home › Books › The Temptation of Forgiveness

The Temptation of Forgiveness 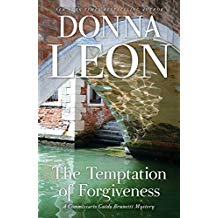 Looking closely, you will notice that the image here is a scene from Venice. I’ve read all 19 — can it really be 19? — of Donna Leon’s novels, all of which center on Venice. I’ve reviewed four of them before, and it’s worth saying  few things about The Temptation of Forgiveness, an intriguing and provocative phrase. I definitely recommend this series of police procedurals, so different from the American and British varieties, and yet so similar in many ways. Not surprisingly, family and food are much more important in these Italian stories than they are in similar English-speaking ones. (A brief explanation: although the author is from New Jersey and wrote these books in English, she lived in Venice for 30 years and definitely conveys a Venetian feel to the entire endeavor.)

Although the pace is not as leisurely as in Alexander McCall Smith’s Botswana series, it’s still appropriately laid back in the Italian manner. Authors tend to build the national character into their stories, even if it risks stereotypes and clichés. Violating expectations might create a more interesting story, but it probably wouldn’t sell books. So we not only have Italian attitudes, we also have Northern/Southern conflicts, including several characters from Naples and Sicily. This leaves us wondering whether the Mafia is going to rear its ugly head. You’ll have to read the books to find out.

Anyway, the entire series features an unusual policeman, one who quotes classical poetry and spends much of this novel re-reading Antigone. That’s not just to add color and make him a three-dimensional character, it’s also relevant to the plot. When do we strictly follow the law, and when do we forgive those who violate it? What about morality vs. the secular law? Again, you’ll have to read the books to find out. Do so!

‹ The Colors of All the Cattle
Teaching and coaching ›