Bimbos of the Death Sun 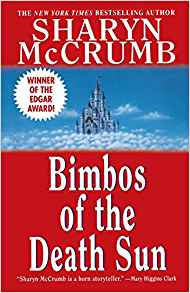 No, it’s not what you think. This hilarious novel, by Sharyn McCrumb, is a satiric mystery about a fictional SF con (that’s science fiction convention, to you mundanes out there). The protagonist is a professor of electrical engineering at Virginia Tech, who wrote a novel called The Effects of Sunspot Activity in Relation to Polymer Acrylic on Capacitive Interaction among High-Frequency Microcomponents in thick Film Circuits. For some unknown reason, his publishers’ marketeers don’t think that will sell very well, so they change the title to Bimbos of the Death Sun. You do see the connection, don’t you?

Like all satires, this one is slightly exaggerated. Like the best satires, it’s not exaggerated very much. At least I don’t think so. I’ve never been to an SF con, or a mystery con, or a fantasy con (and the one in the story is actually a combo of SF, fantasy, and gaming — a relevant plot point). So all I can go by is what I’ve heard from various friends. As far as I can tell, McCrumb is spot on in all regards, from the structure of the con to the jargon to the nature of the fen (plural of “fan,” of course) to the life of an engineering professor. In our world of fast-changing technology, the portrayal of people from 31 years ago is also fascinating, both for its similarities to today and for its differences. No spoilers here, but let’s just say that you’ll recognize a lot of familiar types among the attendees, and you’ll chuckle over the difficulties of finding a floppy disk and a copy program in order to save a manuscript in two different places.

Anyway, this fast-paced mystery is fun to read and the murderer was not at all obvious, even though the victim certainly was. (You do expect a murder at a con, don’t you?)

‹ Congratulations!
Another #1 for Weston, plus a public service flowing from Weston to Dorchester ›