The Hmong are a well-known ethnic group, right?

Well, not exactly. They’re probably not well-known to you, unless you are particularly interested in southeast Asia or happen to live in Minneapolis or Fresno, even though there are about 15 million Hmong worldwide and over a quarter million within the United States. You can read an interesting article about them from MPR, but here I’m just going to discuss the unusual relationship between sound and spelling in written Hmong.

First of all, though, you need to know something in general about tones. I’m not talking about singing, nor about intonation (your pitch may rise at the end of a question, for instance). Those are indeed related uses of the word tone, but they’re not what we mean when we say that a language has tones. Many Americans, no matter how little they know about linguistics, actually do know a tiny bit about the concept of a language having tones, as they may have heard a single example like Mandarin ma, which has five different meanings depending on whether your voice rises or falls or whatever:

This collection of four tones (plus a syllable with no tone at all) illustrates what’s going on, although there’s nothing magic about the number four. A tonal language can have two tones, or eight, or whatever. And there’s nothing special about the fact that many tonal languages are Asian — including not only Mandarin and Hmong but also Japanese, Thai, and hundreds of language you haven’t even heard of — as there are also many that aren’t Asian, such as Swedish and Limburgish. The question of how to write tones is a thorny one. In the standard Pinyin orthography that is used today to write Mandarin in the Roman alphabet, accent marks are placed on the vowels to indicate visually what the pitch is doing aurally (see chart above); that’s pretty clear, and modern technology makes it easy to type most of the time. The same system has been used for centuries for ancient Greek, BTW, where τή has a rising inflection but τῆ has a rising-and-then-falling inflection.

This visual representation of pitch is much better than the use of numbers, as in the old Wade-Giles system of Romanized Chinese, where the five words in the chart above were written ma1, ma2, ma3, ma4, and ma respectively. But Hmong has yet another system, a system that uses a special code that baffles all of us who are not in the know. Each tone is indicated by a silent consonant written after the vowel, as seen in this chart:

So, for example, pos, poj, and pov are all pronounced po, but with three different tones (low, high-falling, and mid-rising respectively) and three different meanings (thorn, female, and throw).

Wow! Now I know. And now you know. 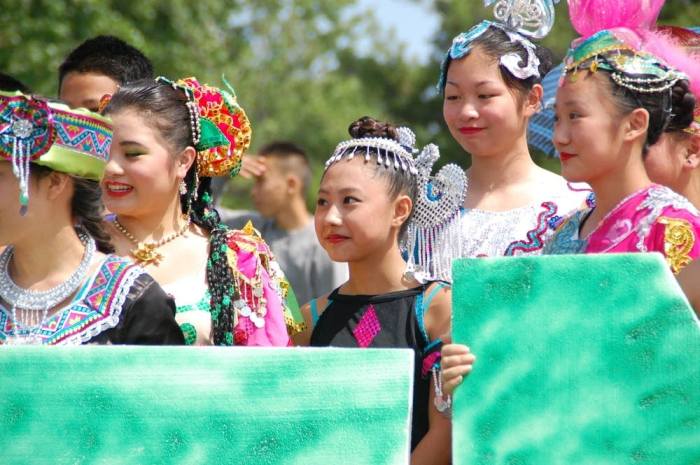 ‹ Doing Justice
What kind of lies does he-who-shall-not-be-named tell? Bald-faced or bold-faced? ›