Virginia Woolf: “On Not Knowing Greek” 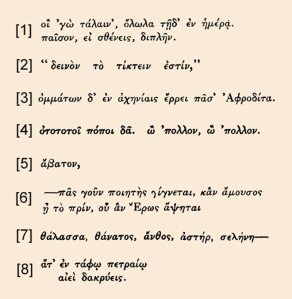 What did I know about Virginia Woolf?

Not much. I knew that she wrote about needing “a room of her own,” and that she had written something about a lighthouse, and I had long ago seen Edward Albee’s Who’s Afraid of Virginia Woolf, which is only vaguely related. And that’s about it.

Then recently I realized that I had to read Woolf’s essay “On Not Knowing Greek,” for reasons that may become clear in another of my posts in a day or two. Her 16-page essay, written almost exactly one century ago, appears in Woolf’s collection The Common Reader, if you’re interested in finding a copy at your local library. (Or you can read it online, if that’s your preference.) I had expected to find an account of why not knowing (ancient) Greek handicapped her as a writer, but that’s not what I found.

The very first page hit me with the cadences of Victorian England (even though Queen Victoria had been dead for over a decade at the time the essay was written). For instance, here is the second sentence:

It continues in this vein, discussing the familiar literature of ancient Greece — familiar to those of us who had studied it for six years, at any rate, both in the original Greek and in English translation. My AP English course in 12th grade was filled with Greek literature in translation, taught as it was by the wonderful Dudley Fitts, translator and teacher extraordinaire. The literature, language, and culture of ancient Greek all enthralled me, so I had to delve into Woolf’s essay. I wouldn’t dream of trying to summarize it here, partly because that task is beyond me and partly because you ought to read it yourself. You don’t have to know Greek to do so. Some familiarity with Homer and Sophocles would certainly be helpful — but if you don’t have that familiarity right now, perhaps Woolf will impel you to remedy that deficiency.

‹ The most commonly spoken language in your state
Bella Luna ›