Gyu-Kaku recently opened a new restaurant at South Bay Center in Dorchester, its third location in Massachusetts (Harvard Square and Brookline predate it). This turns out to be an enormous chain — with over 700 restaurants world-wide, 90% of which are in Japan. And now Dorchester!

So Barbara and I had to try it last night. It has an enormous menu — to match the size of the chain — so we can only report on a tiny fraction of what’s available. Executive summary: not perfect, but far more positive than negative.

First of all, one reason why the menu is so big is that there are many types of offerings. The entire restaurant is billed as yakiniku (Japanese-Korean barbecue), but there are lot of other possibilities, including a variety of all-you-eat and prix-fixe options. We went for à la carte, mostly barbecue, partly because it gave us flexibility but more because we couldn’t possibly eat enough for the other options to make sense.

If you’ve never been to this style of restaurant before — we hadn’t, although we’ve been to Benihana-style performance-oriented Japanese griddle places, which share some similarities — it might be helpful to think of it as a cook-it-yourself hot pot restaurant except that a tabletop grill replaces the broths. (See the photo of the pristine grill below.) The grill is in the middle of the table; don’t burn yourself! The smoke is exhausted through a downdraft fan, so none of it gets in guests’ eyes. There are plenty of non-grilled items as well, and each portion is small enough that you can make a meal out of a number of small plates, and everything is shareable. We started with veggie spring rolls (mostly cabbage, but that’s okay) and spicy tuna volcano (spicy raw tuna on crispy fried rice with an unidentified but yummy sauce). Actually, it’s a misnomer to say “we started with,” since these came at the same time as our entrees even though the menu labeled them clearly as appetizers. Not a big issue. We then shared four entrees, all to be grilled at our leisure: prime kalbi short rib (richly marbled and delicious), shrimp marinated in garlic (four medium ones that grilled in no time), “assorted vegetables to grill” (mushrooms, Vidalia onions, cherry tomatoes, green peppers, and zucchini) and duck marinated in miso (the largest of all four portions and exceptionally delicious when grilled very briefly). Everything was really good, though the veggies would have been better with a marinade and a lower flame; the onions in particular had a tendency to burn before they were fully cooked, but we could have managed that by turning down the flame for them and then turning it back up for the other items. See photos of everything below.

Service was impeccable: attentive and helpful without hovering. Clientele was a beautiful illustration of what Dorchester has become: extraordinarily diverse both racially and linguistically. Noise level was a tad high, but not unreasonable.

The menu page for the Dorchester location annoyingly says “South Bay, MA” in large type at the top — but the full address (a couple of inches down) says 23 District Avenue, Dorchester, MA 02125, so they aren’t trying to hide their location after all. (We in Dot are sensitive about this issue.)

Anyway, a great experience in the new Dorchester! And don’t forget the free parking, which is nothing to sneeze at. 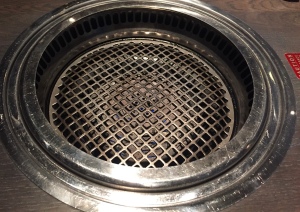 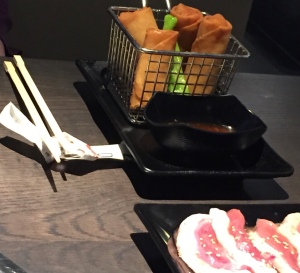 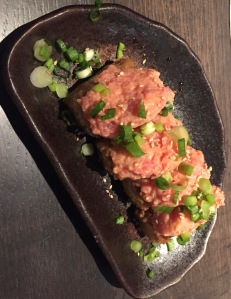 ‹ Easier (perhaps?) languages to identify
What Has Become of You ›