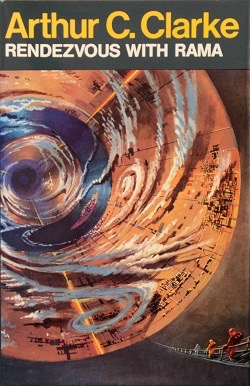 Actually, both were wrong. But that’s a story for another day.

Today we’re here for one purpose: to discuss Arthur C. Clarke’s 1973 novel, Rendezvous with Rama, which I just finished reading for the third time. (Three times in 46 years, that’s not too bad, is it?) Surely this novel must be a good one; otherwise I wouldn’t be reading it yet again, otherwise it wouldn’t have won both the Hugo and the Nebula, and otherwise Clarke wouldn’t be called the second best science fiction writer in the world. (Oops, I just gave something away there.)

Yes, it’s a good novel, or perhaps I should say “a good novel-length story.” It also has some significant flaws. The first question is probably whether it has stood the test of time, nearly half a century later.

The qualified answer is “mostly yes.” It still retains what is possibly the most important property of sf stories, the famous “sense of wonder.” Clarke sucks the reader in with fascinating and convincing detail, creating a visual impression of “Wow!” Being an actual scientist IRL (as was Asimov), he gets the details right and spares no detail. If that process grabs your attention, as it does mine, you will enjoy this novel. If it bores you and you want to get ahead with the plot, then this isn’t the book for you. Worse yet, if you want to get ahead with character development, with real three-dimensional characters who develop over the course of the plot, then you should definitely stay away from Rendezvous with Rama. But if you want something that’s intellectually exciting, if you’re ready to go where no man has gone before — no, wait… that’s from a different series, isn’t it? — then give it a chance. It’s very visual: you get immersive pictures in your head that make you feel that you are exploring wonder after wonder in this strange world (a spaceship, actually, but it’s an effective proxy for the world where the spaceship had been built). There’s a narrative, but it isn’t exactly a plot. There are occasional conflicts and even crises. And there are references to the history of Captain Cook and to international politics during the Cold War, though Clarke doesn’t do a whole lot with either possibility.

One final observation where it definitely has not stood the test of time: its unconscious sexism. We all know that the sf world used to be overwhelmingly male, so it’s not surprising that a novel written at the beginning of the ’70s might reflect that reality. I’m not talking about malignant sexism, the kind that we saw in GamerGate — just the unconscious kind that would never even be acknowledged as such by its perpetrators, like “we need three good men to explore the ship” and “even at the bottom, a man weighed less than three kilos” thrown in casually, despite the presence of women in the crew. Not done with ill intent, as I say, but it can be so easily avoided.

‹ Is that even a word? Is it in the dictionary?
Seattle 1: Chihuly ›