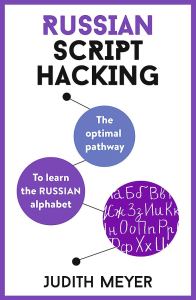 Is it Korsunsky or Korsunskiy or Korsunski or perhaps even Korsunskyi? Would it help to see it written out in Cyrillic rather than in our Roman alphabet? Related question: what’s the capital of Ukraine — Kiev or Kyiv?

Actually, it’s Київ, and that’s one reason to read this book, even though that’s Ukrainian, not Russian. But it’s still Cyrillic. Russian or Ukrainian is the language, Cyrillic is the writing system or script. BTW, can you identify the one non-Russian letter in the Cyrillic spelling of this city?

Back on August 28 I reviewed the first two Script Hacking books: Korean and Arabic. Then, exactly one month later, I reviewed one more: Greek. And now, just over two months after that one, I review Russian Script Hacking, with its lovely purple cover. (Yes, you can’t tell a book… but still…)

We have, of course, the usual caveat for the Script Hacking series: this book won’t teach you Russian grammar, Russian conversation, or even much Russian vocabulary. But it will teach you to read, write, and transliterate the Russian writing system. As a free bonus, this means that you will learn the Ukrainian, Bulgarian, Serbian, Kazakh, Belarusian, Kyrgyz, Macedonian, Tajik, and Mongolian writing systems, each of which is only slightly different from Russian! (The current controversy over spelling and pronouncing Kyiv, which used to be Kiev when the Russians were in charge, is a good illustration… but only if you look at it in Cyrillic: Київ, as stated above. The third letter is the one not found in Russian) Also, slightly off topic, but only slightly: before one of my trips to the late lamented Yugoslavia some time in the ’70s, I decided I had to learn some Serbo-Croatian (of course) and I also wanted to check out the Berlitz style of language learning, so I signed up for an intensive Serbo-Croatian class at Berlitz. Actually, my instructor preferred calling it Croatian-Serbian, as she herself was a Croat. Since Croatian and Serbian are two dialects of the same language, it doesn’t much matter — except that they are written in different alphabets! The instructor assured me that I had no need to get better at reading Cyrillic, which Serbian uses, as I could get along fine without it. (She was, remember, a Croat.) The hitch was it turned out that bus destinations in Serbia were always in Cyrillic, so it was a pain to figure out which bus to take for any given destination! I quickly got better at reading Cyrillic, though my skills have deteriorated in the nearly half a century since then.

As with all the books in this series (see links two paragraphs up), Russian Script Hacking follows a consistent pattern, introducing the alphabet gradually rather than all at once, and including helpful exercises all along after each letter or two. Many of the exercises involve transliterating familiar names, such as foreign or domestic cities, personal names, and so forth. There are helpful activities, including picking out instances of a particular letter from a paragraph of running text. (You might be surprised at how helpful this is.) There’s also a small phrasebook at the end; perhaps this would be useful, though probably less so than Google Translate.

Although I have been acquainted with the Cyrillic alphabet since I was in eighth grade, I have never gotten quick at reading it except for the brief foray to Serbia described above; this book has helped me a lot, despite its claim to be “for beginners.” My aim, in both Russian and Hebrew, is to be able to “read” a word or phrase at a glance — as we do in English, French, or German — rather than decoding it letter by letter. I had reached that skill level in Greek early on — at the end of an intensive summer between ninth and tenth grades — and I used to have it in Hebrew, though that was even longer ago. I still have it in Greek, and we’ll see if I can reach it in Russian and regain it in Hebrew. Speaking of Hebrew, stay tuned for Hebrew Script Hacking next! (But only after it is published in a few months. Sorry about that.)

PS: How many words in this image can you read or figure out? Do you know who Руди Джулиани is? 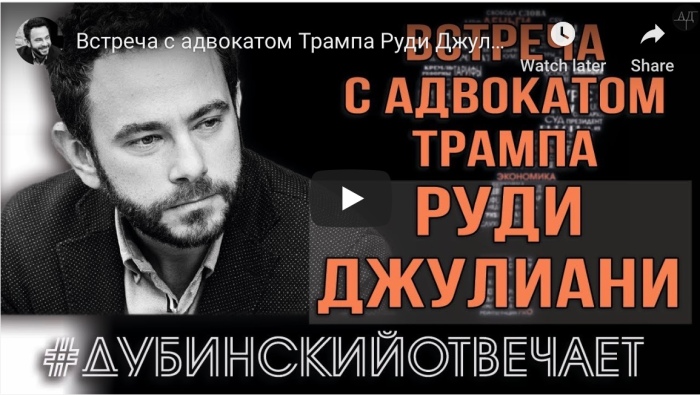 ‹ Every vote counts!
It’s 50 years later; would I still be able to write something like my master’s thesis? ›