Home › Linguistics › Which American dialect do you speak?

Which American dialect do you speak?

You and I don’t speak exactly the same version of American English. Our vocabulary, pronunciation, and maybe even syntax will vary, depending on geography (producing different dialects), socio-economic class (sociolects), and individual characteristics (idiolects).

Many Americans are skilled at identifying where someone is from, based sometimes on accurate information and sometimes on inaccurate information, such as the oversimplified perceptions of the so-called “Boston accent” and certain idiosyncrasies of Boston speech — for example, thinking that the letter “r” is “dropped” or thinking that the intensifying use of “wicked” leaves it as an adjective instead of making it an adverb, which is how it’s actually used. Anyway, the New York Times produced a very helpful questionnaire of a handful of multiple-choice questions (as long as you have a wicked large hand); if you answer all of them, the software will tell you where it thinks you’re from.

When I answered the questions, it concluded that I am probably from Yonkers. Not too far away! Second choice was Newark, which was indeed where I was born. Third was New York City, which is close enough. So try it out, and let me know how accurate the results are. 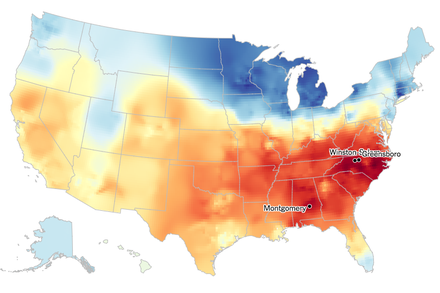 ‹ Map workshop at the BPL
The sister of English ›