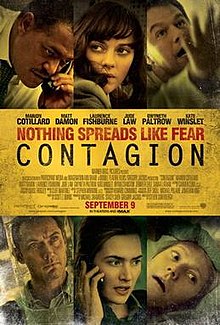 If you haven’t seen it — or even if you have — this is the time to watch Steven Soderbergh’s 2011 movie, Contagion. (Or maybe it’s the time not to watch it, if you worry that it’s going to trigger you.)

As you may know, this film is about a pandemic caused by a coronavirus that originated in China. Surprisingly, for a work of “fiction” that isn’t a documentary, it got an enthusiastic reaction from scientists, both because of its scientific accuracy and because the heroes of the movie are the scientists. The villains are the right-wing bloggers. Soderbergh stays totally away from Fox News and mostly away from the politicians: this was 2011, remember, and nobody really thought that Trump would become president. I know next-to-nothing about actors, but it may be relevant to you that the movie’s stars include Matt Damon, Laurence Fishburne, Jude Law, Gwyneth Paltrow, Kate Winslet, Elliott Gould, and Sanaa Lathan.

Of course a lot of Contagion feels oddly prescient. How could it not? We can all hope that the most horrifying scenes won’t really occur in real life (and they won’t, if people practice social distancing), and we can all hope that the most optimistic scenes will occur. I’m trying hard to avoid spoilers here, but that’s difficult, as I would like to tell you how the whole situation is resolved. I guess you’ll just have to watch it yourself.