Home › Books › The Panda of Death

The Panda of Death 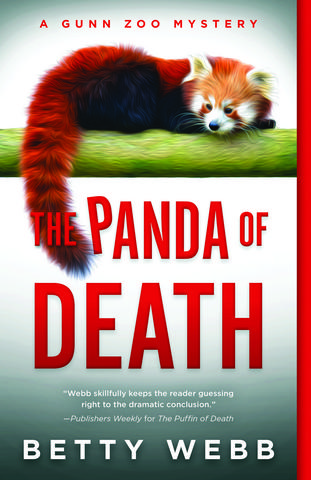 Yes, three murders in one cozy. I guess that’s a lot.  This self-referential quote is from Betty Webb’s latest, The Panda of Death. And yes, it’s a cozy, but I read it anyway, though I don’t usually read cozies. Webb is better known (in my experience) for her much darker novels about polygamous/fundamentalist Mormon offshoots in Utah and Arizona, so her Gunn Zoo series is quite different from what I’m used to. It seems like a good time to read something lighter, doesn’t it? We need that.

This is actually not the first cozy that I’ve read in this series. A couple of years ago I read and reviewed The Puffin of Death, which I liked reasonably well. But the Panda makes a stronger mystery than the Puffin (note, BTW, as you can see from the image it’s a red panda, in case you were expecting the very distantly related black-and-white variety). No puffins, no Icelandic language this time, since this book takes place in Southern California, but that’s OK.

There’s an important sub-plot about a close relative who was newly discovered (due to DNA analysis), based on a real-life experience of the author. Many of us have seen this happen in our own families. The zookeeper narrator and her sheriff husband make for an interesting couple, especially since it’s the zookeeper who is the detective here. The sheriff almost fades into the background, but there are several vivid characters. Excellent plot, some humor, a well-drawn setting, not much character development — but what do you expect from a cozy? Read it, but there’s no need to buy it: just check it out from the library. Oh wait — you have to have done that before the libraries all closed, as I did (just under the wire). Now you’ll have to wait for them to reopen.