Home › Movies & (occasionally) TV › Leonard Cohen; The Doors; Emerson, Lake, and Palmer; Jimi Hendrix; The Who; and so forth

Leonard Cohen; The Doors; Emerson, Lake, and Palmer; Jimi Hendrix; The Who; and so forth 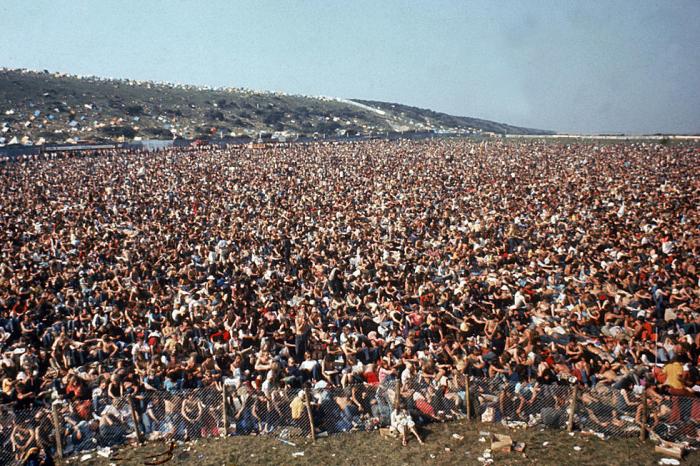 It seems that everyone in my generation was at Woodstock in 1969.

Or so they claim.

Except me. I wasn’t there.

Apparently 400,000 attendees really were there, although well over a million people say they were there.

But that’s not what I’m writing about in this post, and that’s not what you see in the photo. I’m writing about the movie that was made about the “reunion” held the following year on the Isle of Wight: Message to Love: The Isle of Wight Festival Festival, 1970. If you thought Woodstock was big, consider the estimated attendance this time: over 600,000 — possibly 700,000.

But far fewer than half of the attendees were ticket-holders. Because of the nature of this venue (see the photo), there was no way to prevent gate-crashers, and they came in droves. The organizers lost their shirts, and I don’t mean that literally (despite the photo). Therein lies the theme of this absorbing film. The organizers were never expecting to make a profit, but they had certainly hoped they would break even. Most of the young people who attended, however, were fiercely anti-capitalist and expected to get something for nothing. Security was woefully outnumbered.

The movie is ostensibly about the music but really about the conflict between the organizers and the attendees. And what about the performers? Well, they expected to get paid — how silly of them — and therefore ended up on the same side as the organizers, no matter what their politics might be.

A few remarks about the music:

Anyway, see the movie, and pay attention to the interplay between the music and the issues.

‹ Support your local restaurants! (Tavolo and more…)
Wiggins is self-isolating. ›