Yay! News out of Israel that’s about cooperation, not conflict.

According to YNet, Israel’s major English-language news source, the 30 stray cats who hang out in the backyard of the Knesset have started entering the building, with the response that… well… it may not be the response you might have predicted:

Filibuster, Lobby, Revision and Ethics are not only political terms but the names of some of the 30 street cats who live in the backyard of the Knesset in Jerusalem and who had recently been granted purrmanent residence by the facility’s officials.

Knesset Director Sami Baklash has asked Tamar Bar-On, the parliament’s environment chief, to formulate a comprehensive and orderly adoption plan for the cats, which he called “an important link in the ecological balance of the facility.” The city’s veterinary services were later called in to provide shots, neutering and other medical services to the felines, while a dedicated area on the grounds was designated for the cat’s dining pleasure with dry food only on its menu.

“At the initial stage, the Knesset will transfer the cats to veterinary care, which will include neutering or spaying, marking each cat in its ear, vaccination against rabies, and medical treatment if the need arises,” Bar-On said.

“These cats are an important part of the Knesset ecosystem,” Baklash said, “it is our duty to preserve this part of urban nature.”

PS: I didn’t write the title of this post; it actually comes directly from YNet! Thanks to the Unorthodox podcast for providing the link, and here’s a photo of the cats’ outdoor restaurant: 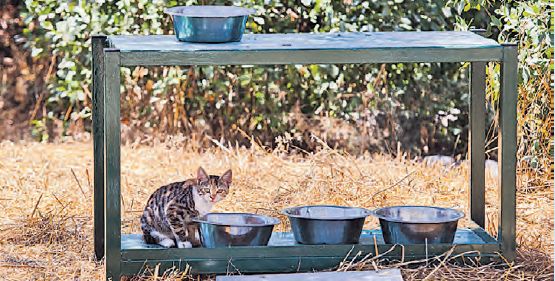 ‹ Can’t have too much Tavolo!
A math problem for the season ›