Home › Life › “Even Racists Got the Blues”

“Even Racists Got the Blues” 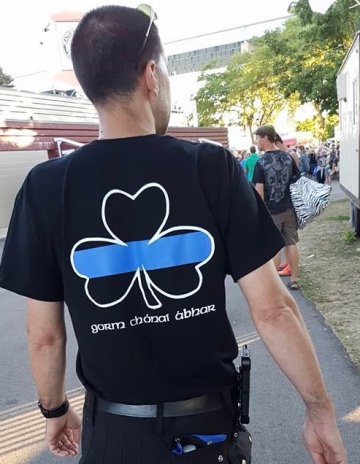 Let’s assume that you neither speak nor read Irish. (Probably a safe guess.)

I, too, neither speak nor read Irish. But work with me here. Study this image, which shows an American wearing a custom tee shirt. Without knowing any Irish, can you guess what the clueless and obnoxious American is trying to say? Study the details before you guess.

OK, time’s up. Did you guess that he’s trying to say “Blue Lives Matter”? Of course you did. But what do these three Irish words really mean?

As I’ve discussed before, even if a helpful Irish native lives across the street from you (as is true in my case), the odds are that they speak no Irish. So what do you do? Well, you turn to Google Translate — right? And it helpfully claims that the sentence means “Blue Living Material.” Hmmm…

Do you always trust Google Translate? I hope not.

This photo, some of the discussion about it, and the very title of this post all come from a wonderful piece in “The Geeky Gaeilgeoir,” Audrey Nickel’s blog about Irish that I read regularly. As not all of her readers live in the U.S., the blogger starts by explaining the Black Lives Matter movement and the “Blue Lives Matter” reaction to it; those two facts set the context for this shirt. But what’s going on linguistically?

First of all, Nickel explains what happened:

I’m often baffled by the number of people who seem to think that you can translate from one language to another simply by pulling the words of one language from a dictionary and plugging them into the syntax of the other. It just doesn’t work that way, friends. Repeat after me: “Languages are not codes for one another.”

That’s exactly what happened here, though. Someone either found a dictionary or searched the internet for the three words “blue,” “lives,” and “matter,” and stuck them together as if they were English. Oy. Dia sábháil (that’s Ulster Irish for “oy”).

Now, what went wrong, linguistically speaking? You’ll have to read Nickel’s entire piece to get the full picture, but here’s the executive summary:

You can connect the dots… but do read the entire article! (Don’t bother reading the comments; they provide a good illustration of why I don’t allow comments in  this blog.)