Home › Books › A Murder of Magpies

A Murder of Magpies 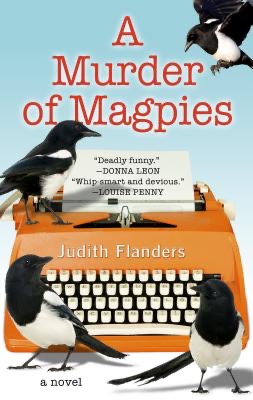 An outstanding first novel from Judith Flanders, published seven years ago, A Murder of Magpies is a mystery that will hold your attention and keep you entertained.

In a recent post I wrote about another Judith Flanders book, but in an entirely different context, so this is definitely a horse of another color—OK, that’s a mixed metaphor that would never happen in a novel like this, which is mostly about the publishing world, especially the world of literary fiction.

Like most mysteries (ha! just made that up), this one takes place in England, but there’s very little that couldn’t just as well be American—with one big exception. That’s the libel law, which is much more of a worry for British publishers than it is for Americans. High-powered lawyers and businesspeople play a role in this novel, but for the most part you learn about the narrator, a well-educated middle-aged editor. She is drawn realistically, as are the rest of the characters. I should say that I listened to the audiobook version, read beautifully by Susan Duerden, who makes all the characters come alive. The author writes very clearly. The combination of narrator and author creates a transparent experience in which nothing gets in the way of the plot and the sense of humor. Favorite line: “But I already have a suit!”

This is a great story, including not only insights into the publishing world, which I know a little about, but also some into the world of fashion, which I know absolutely nothing about. And a sense of place is always of paramount importance to me, and A Murder of Magpies definitely has that as well. All in all, a fine experience!

‹ A new unit of distance?
What? A model railroad can be a computational device and a musical instrument?! ›