Zoom vs. MCET: compare and contrast. 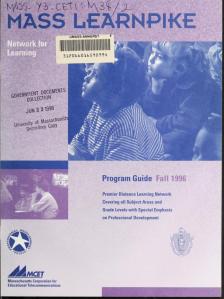 Everyone knows Zoom (the teleconferencing platform, that is, not the old PBS kids’ show).

Everyone knows Zoom. Now, raise your hand if you know MCET.

I thought so: everyone knows Zoom, but very few know MCET, which provided my first experience teaching math on a distance-learning platform. As I mentioned four days ago, MCET was the “Massachusetts Corporation for Educational Telecommunications, a wholly state-owned non-profit that taught enrichment courses over the internet and satellite television.” Their educational network was known as the Mass LearnPike (of course). I taught over 150 hours for them back in the ’90s.

So you would think that I’m an old hand at distance learning. How different could the Zoom experience be?

Let me compare and contrast. I’m assuming that you have at least some familiarity with Zoom because of the pandemic, so I will concentrate on MCET. First of all, the way MCET worked was that a school district would sign up for a small fixed fee and would in return receive an internet connection (not so easy at the time), a satellite dish, and a license to participate in as many classes as they wished. Schools could choose between synchronous and asynchronous connections, depending on their own needs and schedules. The trouble with synchronous connectivity is obvious: if, let’s say, I am teaching precalculus from a TV studio in Cambridge at 10:00 AM on MWF, there’s almost no chance that Weston High School would have a precalculus class that met at precisely that time. So schools picked one or more of three options:

Schools varied as to which they chose. The first option was the easiest, but it was basically unsatisfactory, since it was almost totally one-way. The only way for students to ask questions was to use email. Many schools picked the second option, which worked great from my point of view but was logistically unreliable from the point of view of the participating schools. Weston picked the first two options for some courses but the third one for precalculus, which was a fine compromise from my angle but I’m sure that some of the non-math teachers didn’t approve. The bottom line here was that typically about 100 schools (not all in Massachusetts by any means) would participate in my math class but usually only two or three would be live in any given class.

So what was it like? You need to know the tech setup here: a participating class (or committee of students) would call up the studio over a traditional land line and leave the two-way audio connection open for the entire hour; they would also turn on the large television at the front of their classroom and leave the one-way video connection open for the entire hour. I would begin my class by speaking to all the invisible students, sharing my computer screen whenever appropriate, or standing up and moving to a whiteboard when that was appropriate. Two TV cameras would be on me, with a third on the whiteboard, and the computer was a fourth option, so the director had to be sure that the control room knew which view should be live — just like real television! That wasn’t my worry, but it was essential for me to avoid surprises, so I had to give hints to prompt the camera operators and the people in the control room: I would say things like “Now I’m going to go over to the whiteboard to show you how to solve this equation” or “Let’s look at an image of this fractal on the computer screen.”

The two-way audio connection allowed for a couple of options, which we used every day. Students with questions could tell the phone operator in the control room that they had a question, at which point a voice in my earpiece would say “Weston has a question,” so I could finish up my current thought and then say “Weston, I hear that you have a question.” All the viewers would then hear both of us but they would see only me. The second option was that I had insisted on having short problem-solving breaks, usually two or three per hour, in which I would show a prepared problem on the screen and give everyone a chance to solve it. This, of course, was a no-no (dead air!) that had to be filled with background music, but it seemed the only reasonable thing to do. At the end of a couple of minutes, I would call on a participating school to tell me what their answer was and how they got it. This was, remember, audio only, which was not ideal.

The worst thing was being unable to see my students! It’s bad enough on Zoom, where it’s nearly impossible to read the room, to see students’ reactions, but this was worse, where a small number of students were connected by audio only and a large number were watching it later on their own time. Talking to an invisible audience was unnerving, so I solved the problem by focusing on the camera operators and teaching directly to them; that way I could at least get some kind of reaction.

Often I would ask a colleague to join me as my guest. These classes were great, as we could have a two-way dialog even if I couldn’t have one with my students.

Finally, you may wonder why schools were participating in MCET. Weren’t their own teachers sufficient? The answer is many schools wanted enrichment opportunities, either for variety or because they didn’t have the resources themselves. It was a bit like a high-tech version of guest lecturers. The curriculum taught by MCET went far beyond math, which in fact was only about 2% of their offerings: it was mostly arts and humanities, along with quite a number of fascinating science courses. All in all, it was a great experience for me, allowing me to teach topics that are familiar to my current and past students (such as cryptography and fractals) and giving me a different perspective. But it wasn’t the same as teaching with Zoom!